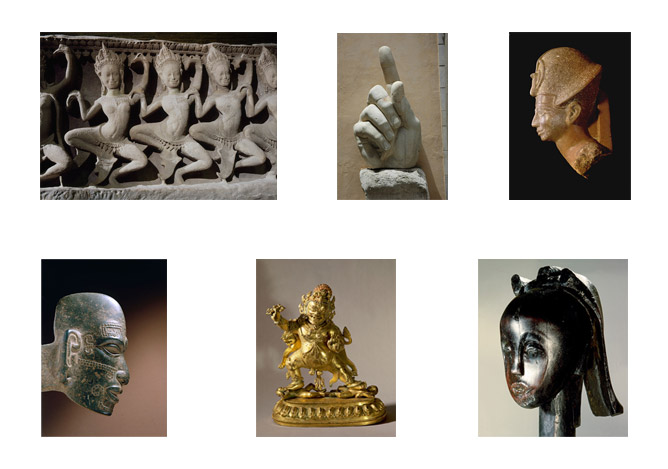 It is often difficult to form an image of people in times past, when there was no photography and little portraiture. Sculptures survive, and Werner Forman Archive has a remarkable collection of them, dating back thousands of years and from all over the world.

During his life, Werner Forman had access to many museums, auctions and private collections, so much of the art he photographed is unique to our archive and not available elsewhere.

Above are some interesting examples.

There are many more in the collection if you search the archive here.

Tenoned head inserted into a temple or pyramid wall. The eyes and mouth were originally inlaid. There are ritual scarifications on the skin and there was probably a nose ring. Country of Origin: South America, possibly Veracruz Date: 600-1000AD. Material: Greenstone.

These heads, known as Bieri, were attached to bark boxes containing the skulls and bones of ancestors, both to guard the relics and as a focus for prayers, complaints and sacrifices. Some scholars believe they are an early form from which the full figure sculptures were developed. Country of Origin: Gabon, Equatorial Africa. Culture: Fang. Date/Period: 19th-20th C. Material: Wood..

A statue of Candavajrapani. Vajrapani is one of five Dhyani-bodhisattvas. He holds a vajra (thunderbolt) in his right hand. Both hands are in the tarjani mudra, threatening evil spirits. Country of Origin: Tibet. Culture: Buddhist.