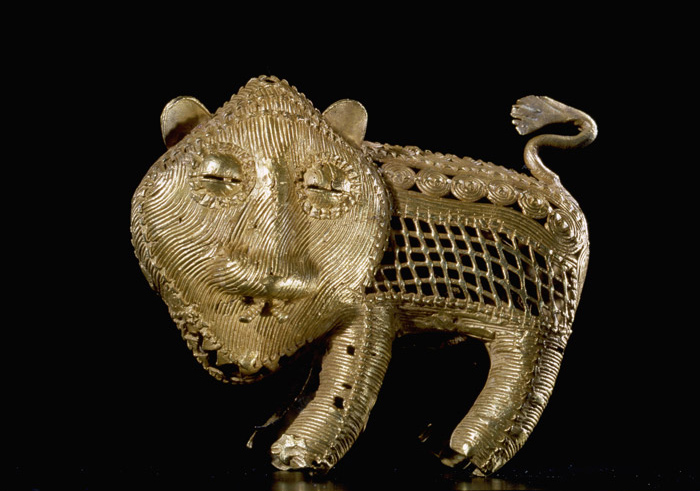 Animals have featured in art from the earliest cave paintings. Ancient artworks cover an astonishing range of different creatures, including those that are fantastical. During the eight decades of his travels, Werner Forman photographed many different animals in art.

Humans have a long and complex relationship with the natural world and particular with animals, this relationship, often a mixture of fear, admiration, greed, cruelty and love, has been continuously and vividly expressed in art. From the Garden of Eden in which people and animals lived in harmony to the ancient Egyptians’ love of cats to the Roman amphitheatre and the bloody slaughter of the arena, there is a duality in the relationship between humans and animals: love and worship, slaughter and extermination From prehistoric times, 15,000 years ago, is a sculpture of a mammoth from reindeer antler. Found in the rock shelter of Montastruc, Tarn-et-Garonne, this spearthrower shows even such a practical device was adorned with the form of the animal it was meant to kill – sympathetic magic perhaps?

Themis Halvantzi, Art Consultant, from Werner Forman Archive says, “We love animals, we watch them with delight, we study their habits with ever-increasing curiousity and we destroy them. We have sacrificed them to the gods, we have killed them in arenas to enjoy a cruel excitement, we hunt still hunt them and we kill them for food, yet we also admire their beauty and their strength.”

Beauty and strength are depicted in this Celtic coin of horse and rider. From the Czech Republic, 450 – 100 BC. Clearly equines were worthy of being stamped onto money.

The Romans extensively depicted animals, both real and mythological in their art. They are famous for their mosaics constructed of small blocks called tesserae, which allowed people to display their wealth and taste. Fish were an important part of the Roman diet. Important enough to have a mosaic of fish to be placed on the floor of a 3rd Century AD villa in Rome. Perhaps the owner was a fishmonger or owned a fishing fleet?

During the next period, from the fifth to fifteenth centuries, great artistic and societal development took place. Animals were a huge part of art in the middle ages. They were used to represent mythical beasts, to decorate medieval manuscripts, and to represent religious icons. As the Renaissance changed people’s thinking, creators like Leonardo da Vinci started to draw and paint animals in a powerful new way. The potential to depict animals in new ways was spreading eastwards across the globe, as this tapestry from The Hermitage in St Petersburg shows.

In the Far East images demonstrated subtlety and grace. Look at the delicate statement in this Indian miniature of a discarded lover playing music to a deer.

The Japanese also were able to master powerful and unusual depictions. Note how this warriors horse has a girth round its middle, to allow it to have some exercise while in the stable. This really sets up more questions than answers – why couldn’t the horse’s rider take it out for exercise? Was it stabled in a castle under siege?

Themis Halvantzi says, “Examples of tribal art from every continent combine animal and human features to symbolise humanity’s bond with the natural environment. Animals also carry a rich variety of symbolic associations like this elaborate golden bird from Peru around 500 AD.”

Werner Forman Archive is a major treasury of images of ancient art, antiquities, culture and landscapes. 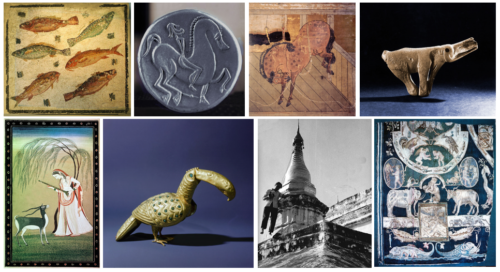