The eyes of the world will focus on Brazil again this summer as the Olympic Games open in Rio de Janeiro in August. In 4Corners’ special selection of images from Brazil, you’ll discover Brazil beyond Rio de Janeiro, Copacabana Beach, Sugarloaf Mountain, and Christ on Mt Corcovado. 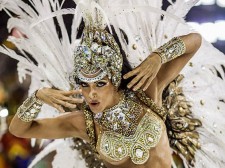 Brazilian people are well-known for their ready smiles and infectious joie de vivre; for a world outlook perhaps encapsulated by the late great futurist architect Oscar Niemeyer who eschewed straight lines and right angles when he said “I am not attracted to straight angles or to the straight line, hard and inflexible, created by man. I am attracted to free-flowing, sensual curves. The curves that I find in the mountains of my country, in the sinuousness of its rivers, in the waves of the ocean, and on the body of the beloved woman. Curves make up the entire Universe, the curved Universe of Einstein”. Maybe it’s those feelings expressed in the sexy rhythmic moves of samba and athletic Capoeira.

See all 4Corners’ images of Brazil for 2016 here, including Oscar Niemeyer’s futurist architecture, some of Brazil’s wide rivers and impenetrable wild places, home to endangered wildlife and cultures and to a fabulously diverse cultural heritage.