Bridgeman Images is delighted to announce that four artists have been chosen as winners of the Bridgeman Studio Award 2015, their annual contemporary art competition on the theme of the ‘Great Outdoors’.

The judging took place on 16 June with entrants assessed for their commercial potential for product licensing and suitability for a contemporary map commission. With 160 entries from across the globe – including America, Australia, Europe, Japan and South Korea – the reach of the competition and quality of the artwork submitted impressed the judges from CultureLabel,Wilderness Festival and Creative Review.

Prizes included:
– 1 Year free subscription to Bridgeman Studio (worth £100)
– £500 high-profile commission to design the Wilderness Festival map
– Creation of their own product line on CultureLabel.com
– Media exposure including profile in August issue of Creative Review

Nik van Es (1987) is a Dutch illustrator living and working in the Netherlands. 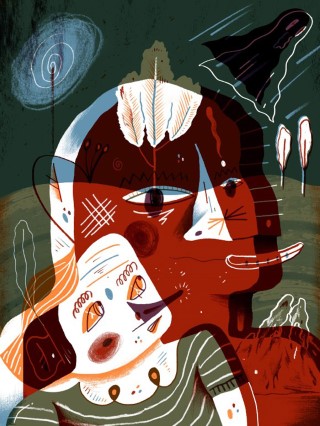 “It wasn’t easy picking a winner from this year’s highly talented entries. Nik’s work jumped out and said, “I will do something original.” It had a wilderness of its own.

A story telling illustrative style. Perfect for a festival where fantasy forms part of the narrative and the experience. We are all very excited about this artist and it was a real honour awarding him the commission.”

What’s next for Nik van Es

Following a design brief from the team at Wilderness, Nik is working on producing the artwork that will feature on 3 large billboards and be available as a printed map, distributed to 30,000 people, at the multi-award winning 4-day British festival in August.

A CultureLabel product line has been awarded to…

An illustrator and printmaker living and working in London, inspired by urban landscapes

British artist exploring the interplay between painting, collage and photography

Lucy Baxter, Commercial Director at CultureLabel said, “We are truly excited to be working with these exciting emerging artists and look forward to launching the limited edition product line featuring their exceptional artwork.”

Bridgeman Images is the world’s leading rights-managed specialist in reproducing and licensing art, photography and footage. Over the past 40 years we have built up a global client base through our offices in London, New York, Paris and Berlin, representing some of the world’s most prestigious museums and artists for copyright.  Bridgeman’s extensive portfolio includes Bridgeman Education, Bridgeman Studio, and Bridgeman Footage.

Bridgeman Studio was launched in April 2014 and has a growing portfolio of accessible contemporary art for image licensing and creative commissions. One year on they have 130 artists and nearly 10,000 images.

Many thanks to our Bridgeman Studio Award sponsors