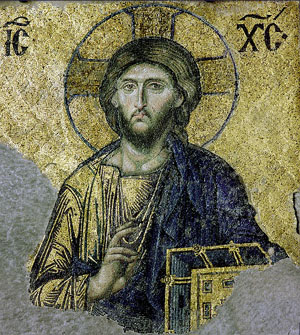 Byzantium was the seat of one of the longest surviving and most powerful empires of the western world. Originally the capital of the Roman Empire in the East, Byzantium remained, for a thousand years after the fall of Rome, a centre of religion and learning, and the site of many buildings and artefacts of legendary wealth and beauty.

Werner Forman Archive has a selection of the most iconic images of this city of gold and faith. Orthodox Christianity permeated every aspect of Byzantine life, from the Emperor down to the humblest artisan. That this Empire survived so long was a testimony to the effective marriage of Christian ideals and ancient Roman forms, and to the racial harmony of this thoroughly cosmopolitan society. Werner Forman’s photographs present the spirit of Byzantium as reflected in its art, its buildings, and its artefacts.

The Empire originally took its name from the city of Byzantium, later renamed to Constantinople and now known as Istanbul, a city steeped in wealth and defined by religion. Heavily fortified and ruled by impressive military and administrative elite, headed by the emperor, the city was able to withstand waves of conquerors.

Religion permeated every aspect of Byzantine life and was the connecting link, the bulwark that propped the Empire through its 10 centuries of survival. The emperor, the imperial family and aristocracy were expected to grant large sums of money for the building and beautification of churches.

Icons and relics were revered and for a large part of the population they even became personifications of saints leading thus to the great civil disturbance of Iconomachy, the fight against Icons. Some of the best survivals of architecture from Byzantium are not palaces but churches such as the famous St Sophia, the cathedral of Constantinople.

Life for the Byzantines was closely linked with trade; the decline of the empire is connected to diminishing trade opportunities in the East and the taking over of trade routes by the big Italian city states, such as Venice. Manuscripts illustrate professions that made the empire wealthy and the affluence of the population is evident in some of the surviving objects.

Having survived for so long , it was internal strife and lack of support from the western powers that signalled the downfall of the empire. The Byzantine emperors of the 14thC hoped that Christianity, the common religion with these powers, would be their salvation against the onslaught of the Ottoman Turks, but this was not to be. The Fall of Constantinople to the Ottoman Empire in 1453 signalled the end of the Byzantine Empire.

Barbara Heller, Director Werner Forman Archive says, “We have an outstanding collection of Byzantine images, all carefully catalogued and captioned.”

“Working with the Werner Forman Archive is quick, uncomplicated and efficient. I wish all photo archvies would work like this.” Anna Zielinski, Syomore Ancient Art, Switzerland.

This mosaic of the enthroned Christ is in the South Gallery of the Hagia Sophia, Istanbul. It conveys the brilliance and maturity of the last phase of Byzantine art in Constantinople. ©Werner Forman Archive