Getty Images and Climate Visuals Award $20,000 to photojournalists as part of broader effort to advance the visual narratives of the global climate crisis 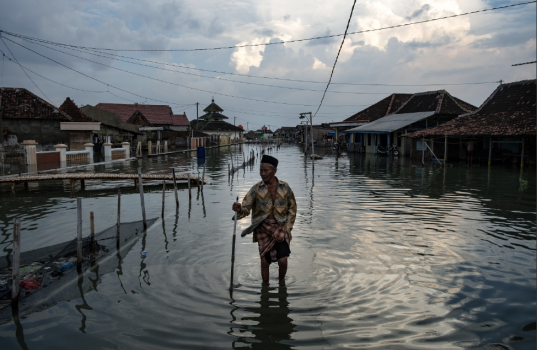 Getty Images, a world leader in visual communications, in partnership with Climate Visuals, the world’s only evidence-backed programme for climate change photography, has named two recipients of the inaugural Getty Images Climate Visuals Grants, with each photojournalist receiving a grant of $10,000 to help advance the visual narratives surrounding this complex global issue.

As media coverage of the global climate crisis intensified through 2019, Getty Images and Climate Visuals understand the need to meet and sustain that growing attention with nuanced photojournalism that advances and localises the world’s collective understanding of the issues at stake. For this inaugural grant, Getty Images received 144 submissions from photographers across over 40 different nations.

The judges awarded two recipients, alongside one honourable mention – all of whom focused work on the rising sea levels in their respective locations and the vast damage this is inflicting on communities worldwide. The 2020 Getty Images Climate Visuals Grant recipients are:

– Aji Styawan for Drowning Land: Aji, a freelance photojournalist from Indonesia, is committed to documenting the effect climate change has already had on millions of lives. His work focuses on the resiliency of the people in the Demak Regency of Indonesia as they live with rising sea levels in not only their communities, but even inside their homes.

– Greg Kahn for 3 Millimeters: Greg, a Pulitzer Prize nominated documentary fine art photographer receives a grant for 3 Millimeters, which explores rising sea levels on the Eastern Shore of Maryland, USA. His project depicts the slow drowning of a historic culture that built an entire cultural ecosystem on the shifting tidal waves.

Additionally, Acacia Johnson, a photojournalist from Alaska,  was recognised with an honourable mention for her project Open Water Season: Adapting to an Ice-Free Arctic, which focuses on sea ice melting across the Arctic and the ways in which Inuit communities must adapt to prolonged seasons of open water.

“We are thrilled to support photojournalists who understand that visual content has the power to move the world and redefine the narratives around global issues, like the climate crisis. We were blown away by the quality of the recipients’ work, as well as their vision and commitment to catalyse a new visual language for climate change.”

Submissions were judged by a prestigious industry-leading panel, including:

“We reviewed so many compelling photos of both devastating climate impacts and hopeful climate solutions. Looking through the stories of strong, resilient communities that are living with and adapting to climate change was particularly moving. The two recipients will be supported to continue exploring comparable narratives of sea level rise in diverse and globally distant landscapes, cultures and geography. Their local access and sense of true representation shone through at application.”

Since it was founded in 1995, Getty Images has been buoyed by its outstanding, award-winning contributors and is deeply committed to supporting the global photojournalism community. The Getty Images Climate Visuals Grants is part of the wider Getty Images Grants program, which since its inception has donated over US$1.6 million to photographers and videographers around the world.