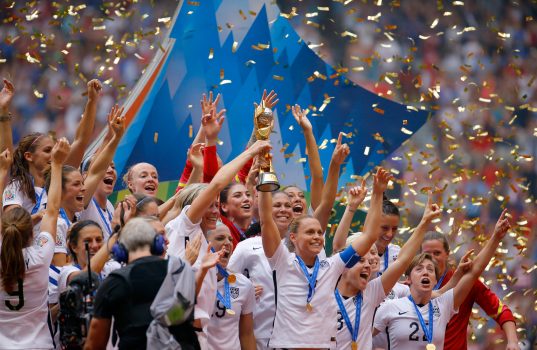 Getty Images, a world leader in visual communications, and FIFA have announced a strategic multi-year agreement through the FIFA World Cup Qatar 2022™.

Under the agreement, Getty Images will serve as the Authorized Photographic Agency of FIFA, a title it has held since 2009, and one that gives the company unparalleled coverage, access and the rights to exclusive content throughout FIFA’s tournaments, including the upcoming FIFA Women’s World Cup France 2019™.

Getty Images’ award-winning photographers and editors will capture every angle of the FIFA Women’s World Cup 2019.

With six official FIFA photographers, five of them women, Getty Images will have access to exclusive shooting positions for every match, behind the scenes access, official portraits of each player, and atmospheric venue imagery, all of which contribute to the FIFA Collection only available to license through Getty Images.

In collaboration with FIFA’s digital team, Getty Images’ skilled production team will also be delivering creative edits in the form of alternative views and social media-ready assets to Getty Images’ almost one million customers around the world.

“Getty Images is thrilled to renew our longstanding partnership with FIFA,” said Getty Images Global Head of Content Ken Mainardis. “We strive to be a valuable, creative component of the FIFA team to deliver premium content that shows how unique the world’s most popular sport is, often from perspectives that fans have never seen before.

Getty Images has always been an innovator in sports photography, and we look forward to bringing stunning imagery to fans of the global game in partnership with FIFA over the coming years.”

“The partnership with Getty Images is vitally important to FIFA and one of the most relevant ways in which we bring football fans closer to the action,” said FIFA Chief Digital Transformation & Innovation Officer, Luís Vicente.

“With the FIFA Women’s World Cup just a few weeks away, we are looking forward to seeing amazing, unique content being unveiled by our partnership with Getty Images, amplifying the narrative and storytelling of a game changing World Cup for women and for football.”

Getty Images partners with many of the most significant sports leagues and governing bodies in the world.

Today, Getty Images is the official photographer or photographic partner to over 80 of the world’s leading sports governing bodies, leagues, and clubs, including the PGA, FIFA, the International Olympic Committee and many more.