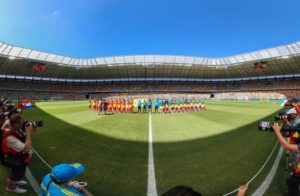 The launch of the Getty Images Virtual Reality Group brings high quality VR and 360 content to everyone, satisfying the growing appetite for immersive content

Getty Images, the world leader in visual communication, has announced the launch of the Getty Images Virtual Reality Group, a new business dedicated to the creation and global distribution of virtual reality (VR) content.

The Getty Images Virtual Reality Group brings the very latest in photographic and video technology together with Getty Images’ 21 years of experience in visual storytelling, to offer exceptional content for existing and future VR platforms. The Group provides a comprehensive offering of over 12,000 premium 360 images with new content added daily, as well as high res gigapixel content from key events and venues.  High quality VR production is also being offered through Getty Images Assignments.

Quick to adapt to new image technologies, Getty images began building its collection of 360 and gigapixel imagery four years ago, pioneering the use of these techniques in its role as the Official Photographic Agency for the International Olympic Committee at the 2012 London Olympics. Fast track to today, and every Getty Images photographer at the upcoming Rio Olympic Games, will be equipped with a 360 camera. This is just one example of how Getty Images is utilizing its expertise, its access to over 130,000 annual news, sport and entertainment events and its unique relationships to generate high-end VR content, and feed the growing demand for a more immersive visual experience.

“The technology is still in its infancy – as are the business models addressing how to use it – but we can expect to see VR become a leading tool for visual storytelling. It is anticipated that over 14 million consoles will sell this year alone (TrendForce), and we are only on the cusp of what will be a tectonic plate shift in VR” said Dawn Airey, Chief Executive Officer of Getty Images.

Airey continues: “With the launch of the Getty Images Virtual Reality Group, we are embedding VR content technologies into the core of our business and ensuring that, as use of VR continues to grow, its users are further enhancing their experience with access to the world’s best imagery.”

“The diverse range of 360 degree content that we produce – from the red carpet to the stadiums of the world’s biggest sporting events and the frontline of conflict – allows people to access information and experiences that were previously off limits,” said Hugh Pinney, Vice President of Editorial Content at Getty Images. “Virtual Reality is completely transforming the way we view and experience world events.”

The Group will continue to build on Getty Images existing VR content offering, which includes 360 content captured by its award-winning news, sport and entertainment photographers as well as geo-located, interactive panoramic images from its content partner 360cities.net.

Last month, Getty Images and Google announced their latest partnership, which sees Getty Images supplying hi-res VR content from current events around the world for Google Expeditions. Getty Images partnered with Oculus Rift in June 2015 to make its 360 imagery available for users of the Oculus platform via its 360° View by Getty Images collection.