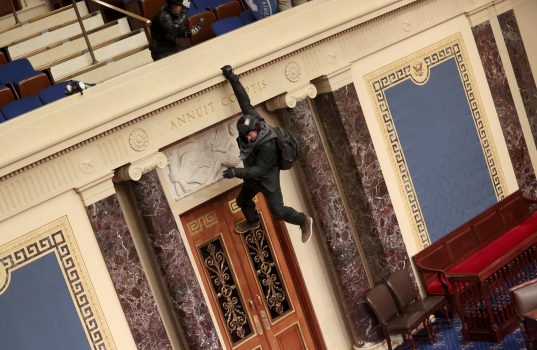 Win McNamee was awarded first place in the Picture Story/Jan 6 and Portfolio categories. McNamee also finished second place in Political Portfolio and received Awards of Excellence in Presidential and January 6 Attack on the Capitol categories.

Patrick Smith won first and third place in the Picture Story/Sports category. He also received an Award of Excellence in the Feature category.

Chip Somodevilla received Awards of Excellence in the Portrait/Personality and Picture Story/News categories.

Tasos Katopodis won first place in the Pictorial category. He also finished in third place in the Sports Feature/Reaction category and received Awards of Excellence in the Domestic News and Picture Story/News categories.

Getty Images Global Head of Content Ken Mainardis said, “Getty Images is incredibly proud of Drew, Win, Patrick, Chip and Tasos for their work over the last 12 months, including during the events on January 6th. At Getty Images, we believe imagery has the power to move the world and no one does it better than these five photographers.”

Picture credit: A protester is seen hanging from the balcony in the Senate Chamber on January 06, 2021 in Washington, DC. ©Win McNamee/Getty Images