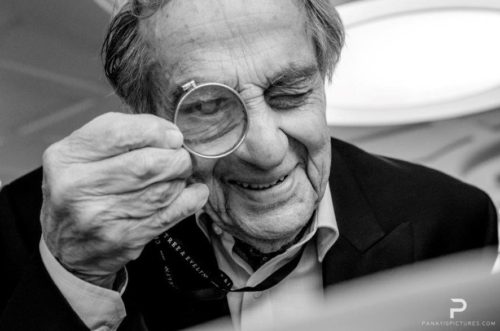 Frank Selby, co-founder (with his wife, Elizabeth) in 1954 of the renowned picture agency Rex Features, turned one hundred on Friday, 12th January. The family celebrated this milestone birthday with a party near to Frank’s and Elizabeth’s home in north London, attended by over 100 close friends and relatives from around the world.

Rex Features was founded in 1954 by husband-and-wife team Frank and Elizabeth Selby. Journalism ran in both families – Frank’s father was Editor-in-Chief of a large Hungarian newspaper group and Elizabeth’s father was a journalist – and they met in London while Frank was serving in the British Army and Elizabeth worked for the Free French resistance organisation’s London HQ.

They began the business in the front room of the family home in north-west London and remained joint managing directors until the early 2000s.

By the 1960s, Rex was providing a regular supply of features, news and celebrity pictures to the press in Britain and overseas. It was particularly well-known for its supply of humorous pictures and features which published regularly in the UK daily newspapers during the 60s, 70s and 80s, and for its numerous high-value exclusive news and Royal “scoops” which published in the Media regularly over several decades in the UK and around the world.

The company gained greater prominence in 1981 when, newly located in a large, Victorian Refuge and Ragged School building in Clerkenwell following a fire at its old premises, Rex’s new technology (in-house colour processing and duplicating, introduced by Frank’s and Elizabeth’s son, John, who had joined the company full-time in 1976) allowed it to beat many of its rivals with its coverage of Prince Charles and Lady Diana’s wedding.

Throughout his long career in the industry, Frank was always very highly-respected in Fleet Street by photographers and clients alike. Rex Features was a founder-member of BAPLA, and Frank and Elizabeth were ardent supporters of the Association throughout their careers in the photo industry, for which they were thanked when they attended BAPLA’s 40th anniversary party in 2015.