Location Photography in support of the British Museum’s Exhibition Programme 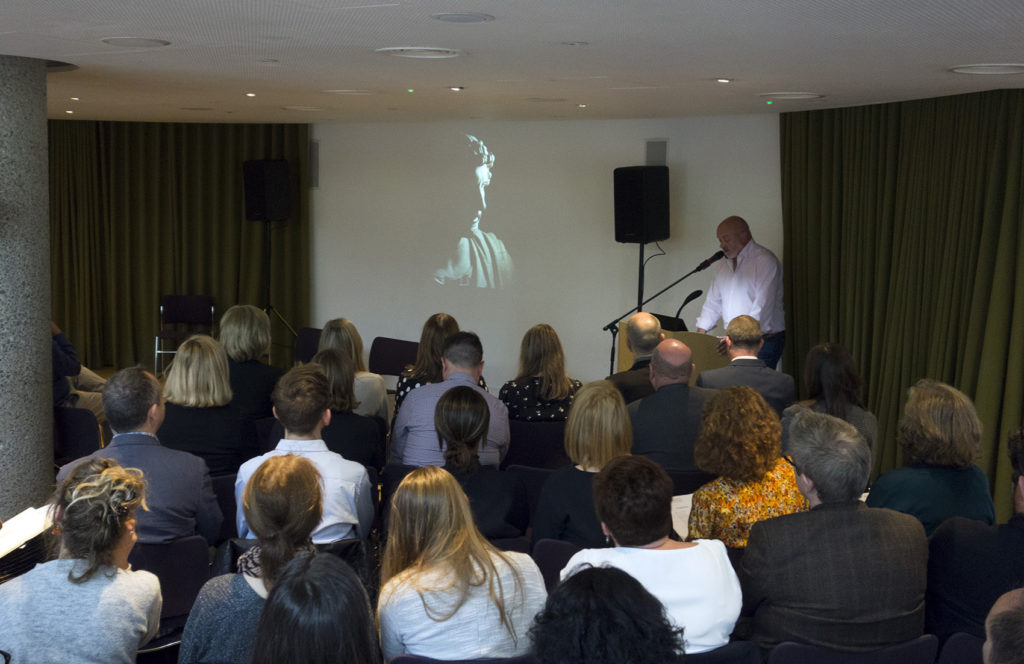 Transcript of the presentation by John Williams at BAPLA FOCUS 2018

“.…a grotesque caricature in bronze dredged from the Thames in 1834, misleadingly dramatised and made beautiful by a photographer working for the museum catalogue. As an aside, I am compelled to say that responsible institutions have a duty to ensure, in every case, that their photographers provide accurate records rather than examples of the photograph as art”.………review of “Hadrian: Empire & Conflict” by Brian Sewell, The Evening Standard.

Reading this review on my way home one evening I realised Mr. Sewell was referring to me.

His words made me think, and also conclude that he was incorrect. It is not our jobs as museum photographers to “provide accurate records” “in every case”. Naturally, when requested we produce detailed photographs where necessary, but it is also our responsibility to listen to curators explain their exhibition plans.

To ask what inspires them to want to tell the story. Then, it is up to us to help them achieve that and guide them using our experience and hopefully skill.

The two images below represent this idea.

The one on the left is the one mentioned in the review. The other is a photograph I took after I had listened to the curator talk about Hadrian; the man and his legacy.

The curator thought my shot was “a little dark”, to which I suggested this was not about bronze and marble but skin and bone. The photograph was meant to be a personal “snap” of a friend caught unawares and that if you carried on looking at it for long enough he might get up and walk away. 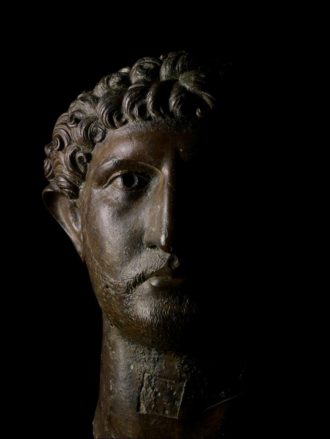 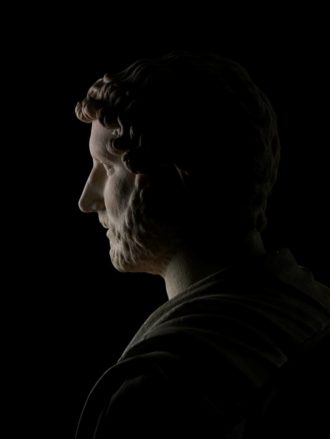 When working on location I am always aware of how poor initial shots can be.

Knowing the orientation of a city or archaeological site is essential and how the sun moves across the scene is paramount.

I never get too bothered about indifferent photos at the start of a job. I tell myself things will improve.

The image below of the Pont Sant’Angelo in Rome effectively took me 6 months.

6 months to get to know the city and understand the light was best late in the day from the shadow side of the bridge. 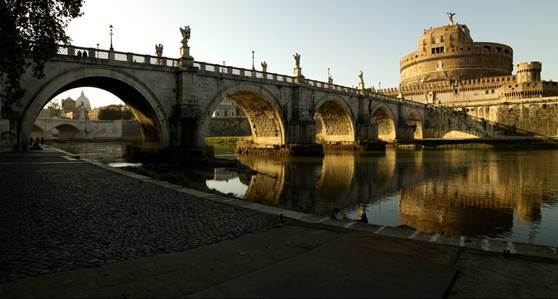 Getting out of bed very early is also an occupational hazard of this job.

Crowds can ruin an image and also “date” it quite quickly.

Where possible I avoid people and if I can’t then I try to compose images to crop them out.

When producing object photography in a museum or gallery we hardly ever get a dedicated space in which to work.

If the institution is in Europe then we quite often fly out on a Sunday and then work in the gallery space on Monday when most museums in Europe are closed to the public.

The objects are shot in situ with the challenge being to produce photos which will look exactly the same as ones we may have taken back in our studios in London for continuity. 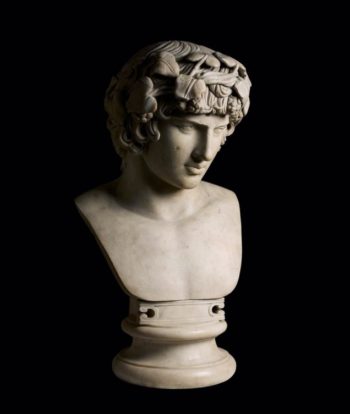 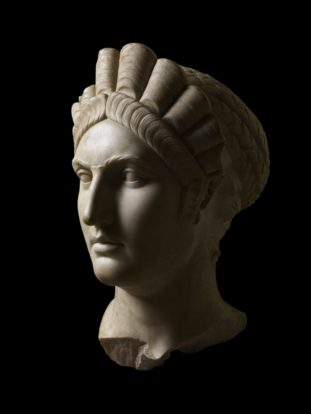 The images below taken in an area of Pompeii reserved for staff security is typical; a table which had seen better days next to discarded photo copiers and computer equipment.

A borrowed piece of A3 and a bit of experience still meant we produced a decent shot. 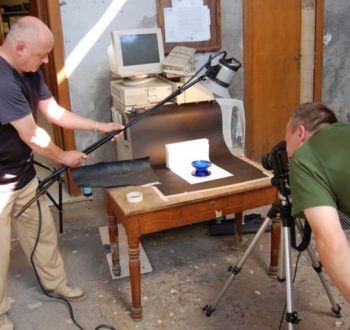 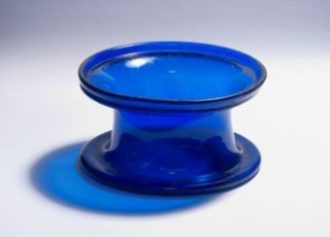 Where possible I try to come up with ideas that curators cannot imagine but may provide something a little extra for the exhibtion designers.

Landscapes, architecture………”pretty pictures” for decoration, mood and a sense of place.

The scene below was conjured up by me one night in Pompeii when I thought up the idea of being the last person walking up the street before the volcanic eruption when everybody else was in their homes cooking dinner and settling down for the evening.

It was actually taken in Herculaneum at about 15:00 on a very dull day.

However by under-exposing the image and then taking 8-10 separate photos where a flash was fired  in each individual window or door we managed to blend them into a scene which just did not exist to the eye.

One problem is that electronic flash is “daylight” and we wanted the light in the houses to be warm.

An orange plastic bowl borrowed from the kitchen in our rented apartment did the trick when held over the flash head. 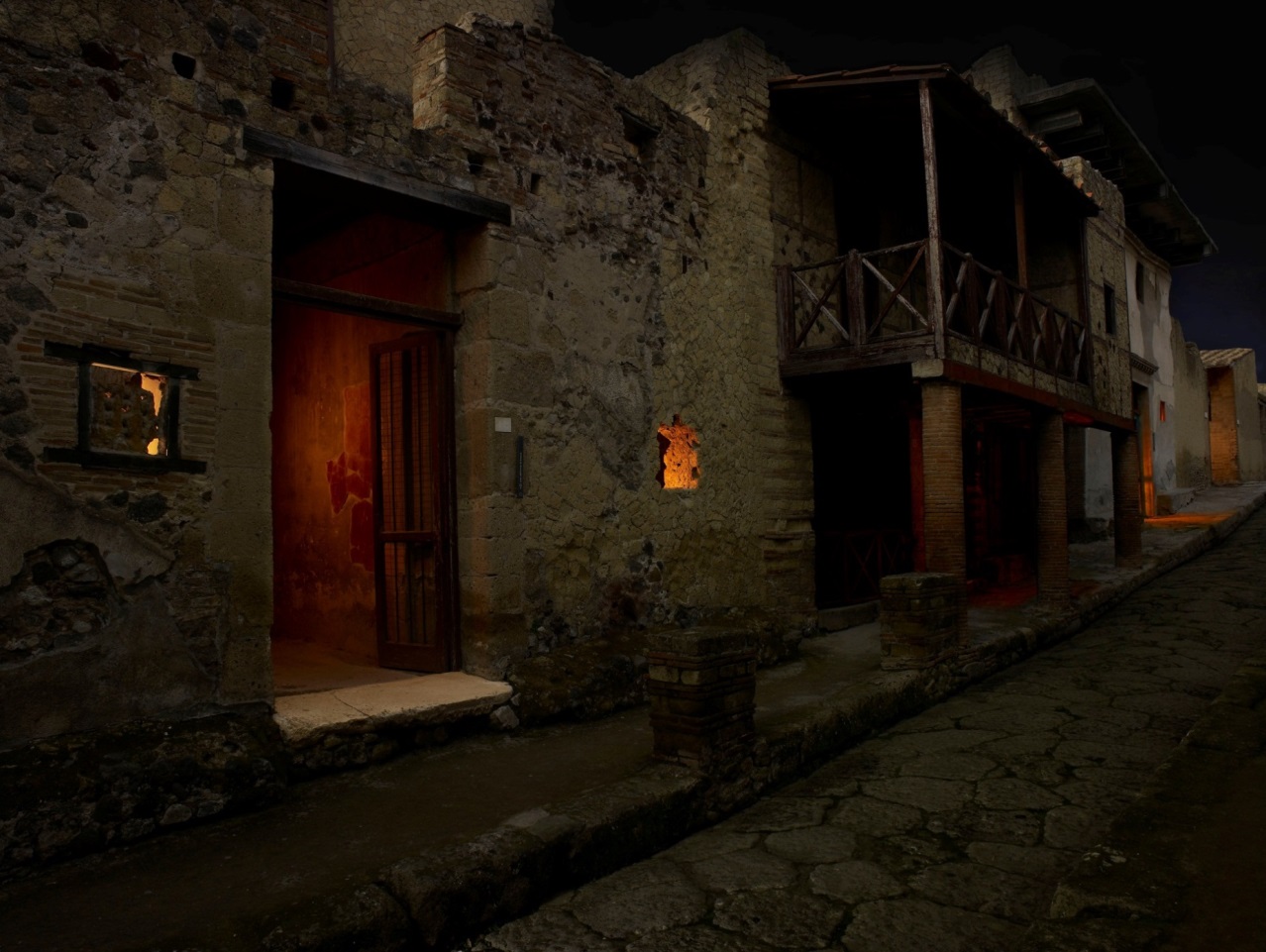 Occasionally we just get lucky as is the case of the shot below. I was in Enna in central Sicily and had a meeting over 100 miles away in Palermo.

I was driving out of town at 06:00am and in the early morning light on a curve in the road a view of Etna, smoking away to itself was revealed. Annoyingly only 18 days later it blew its top and produced amazing scenes.

My job is to help people produce something they just cannot “see”.

Recently I was working in Uzbekistan and had virtually no time to take photos of scenery and buildings due to a very full timetable.

I had to take the image below very quickly and although it is an ordinary photograph I realised that the dull light might be improved by turning it black & white. The designers were quite excited by the result.

When I say “very quickly” I mean it.

In this case my taxi driver didn’t even bother to turn off his engine as we had to be somewhere else in Bukhara in 10 minutes. 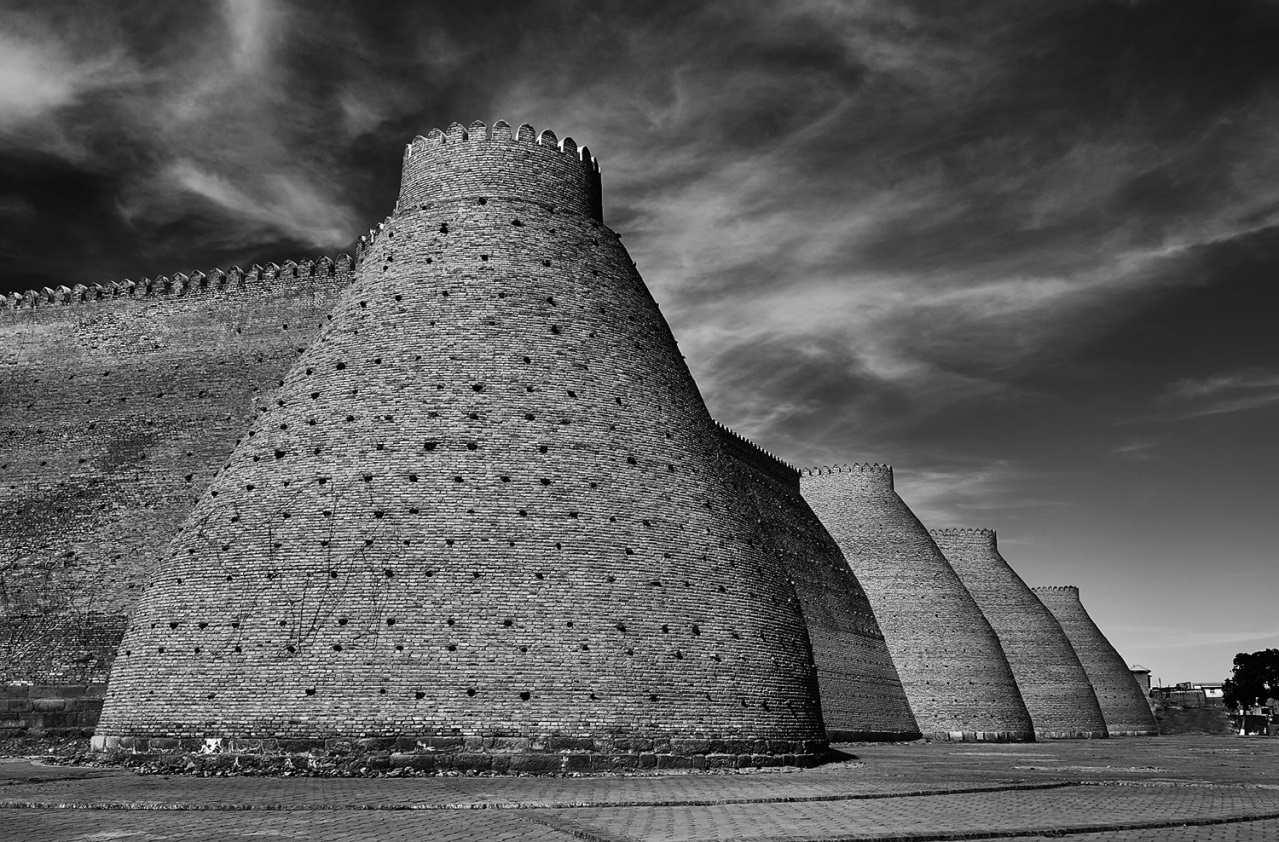 So, as mentioned earlier I think Brian Sewell was incorrect. It is my job to record images, but not in every case. It is my job however to listen carefully, ask questions and then interpret. I always think if you want legal advice I would ask a Lawyer. If you want photographic advice……ask a photographer.

All pictures in presentation ©Trustees of the British Museum