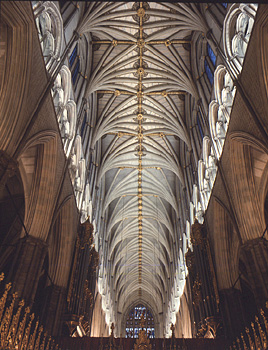 Westminster Abbey is the place where the kings and queens of England are crowned, married and buried. A UNESCO World Heritage site: a religious building has stood on the spot for over 1000 years and in 1066 both King Harold and his nemesis William the Conqueror were crowned there.  Construction of the present cathedral was begun in 1245 by King Henry III who designated it for his burial. It has been extended and remodelled over the centuries.  During the Second World War it was damaged by bombing and some areas had to be reconstructed

The last royal wedding held there was Prince William and Catherine Middleton in 2011. They now are titled the Duke and Duchess of Cambridge.

Werner Forman took some beautiful interiors of the Abbey.  There is an amusing story behind this:because the Abbey is thronged with tourists for most of the time, it is impossible to set up photographic equipment and lights to do the job properly.  Werner had been commissioned by the publishers of a book on the Abbey but was unable to do the photography during the day.  In the end, by special arrangement with the holy authorities, he was locked in the Abbey for the night, and that was how he got these beautiful images.

Barbara Heller, Director Werner Forman Archive, says, “These are unique and atmospheric shots of one of the most significant buildings in British History and we are proud to have them in our collection.”

Vaulting of the nave looking towards the west. The Abbey was begun by Henry III in the new French Gothic style. Although the nave was not completed until the end of the C16th, it conforms to the original designs of the Master Mason Henry de Reyns © Werner Forman Archive