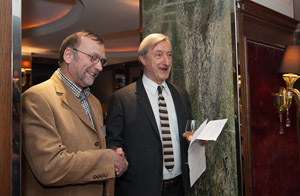 ‘Jura Wine’ won Best Drink Book at the Awards and Mick Rock of Cephas Picture Library, the leading specialist wine image source, was the principal photographer for the book and represented the author, Wink Lorch, at the ceremony.

Writer and photographer Mark Diacono – known for his commitment to sustainable, ethically sourced food – scooped the prestigious prize for food writing for his 2014 publication, A Year at Otter Farm (Bloomsbury).

The book, which the judges commended for its vibrant celebration of growing, cooking and eating alongside high production values, charts the seasonal challenges and triumphs of rural living. Tracing a full year at Otter Farm – a unique smallholding in Devon – the book is packed with inspiring recipes through the seasons, all brimming with flavour and fresh ingredients.

Annie Bell, this year’s assessor for the food books, said: “A Year at Otter Farm centres on the story of how Mark Diacono set out to plant the country’s first climate change farm, and if this isn’t enough of an achievement, his recipes are skilfully crafted, real, accessible and down-to-earth, but equally very accomplished. The photographs are beautiful, and Mark writes like an angel. But it’s the way these elements are in complete harmony with each other that makes this book so outstanding.”

Mark Diacono said: “It’s astonishing to win this award, especially considering the quality of previous winners – from Nigel Slater to Hugh Fearnley-Whittingstall. It’s such a great honour and I’m really bowled over. It’s still sinking in.”

Meanwhile, wine writer Wink Lorch was awarded this year’s prize in the drink category for Jura Wine (Wine Travel Media), an insider’s guide to the Jura wine region, with local food and travel tips. The judges described the publication as exhaustively researched, packed with information and full of good photos.

Julian Barnes, this year’s assessor for the wine books, said: “Jura Wine is the first proper book in English about the wines of Jura. When its author took her first-ever glass of it, she thought it was ‘weird’. It is a reaction many of us have shared, and perhaps not got beyond. Happily for us, she did, and has produced a personal and deeply committed guide to this often intractable region.”

Wink Lorch said: “I am hugely grateful to the Andre Simon awards judges for choosing my Jura Wine book for the best drinks book award, a real honour especially as Andre Simon himself loved to write about French wines. Great news for the little Jura wine region and for me too, with thanks to my wonderful team who helped create the book, and to the Kickstarter supporters.”

Alongside this year’s food and drink awards, philosopher Julian Baggini’s publication The Virtues of the Table (Granta) – which looks at how we eat, farm and shop for food and what these choices say about us – was recognised with a Special Commendation. Annie Bell described the book as “inspired” and a “great rarity” and “as scientific as it is artistic”. “Julian attacks his subjects with swashbuckling bravado, skilfully dissecting the received wisdom and tossing it aside, he then rebuilds the facts into a completely new model.”

Founded in 1972, the André Simon Food & Drink Book Awards are the only awards in the UK to recognise exclusively the achievements of food and drink writers and are the longest continuous running awards of their kind.

Previous winners include Michel Roux, Caroline Conran, Jancis Robinson, Julia Harding, Hugh Fearnley-Whittingstall, Nigel Slater and Rick Stein. The winners in each category were awarded £2000. The recipients of the John Avery and the Special Commendation Award received £1500 each, while each shortlisted author received £200.

Nicholas Lander, André Simon Food & Drink Book Award Trustee, says: “The quality of the writing this year was outstanding. As a reader, it’s been more exciting than ever, while as a trustee the awards get increasingly difficult because the books just keep getting better and better.”