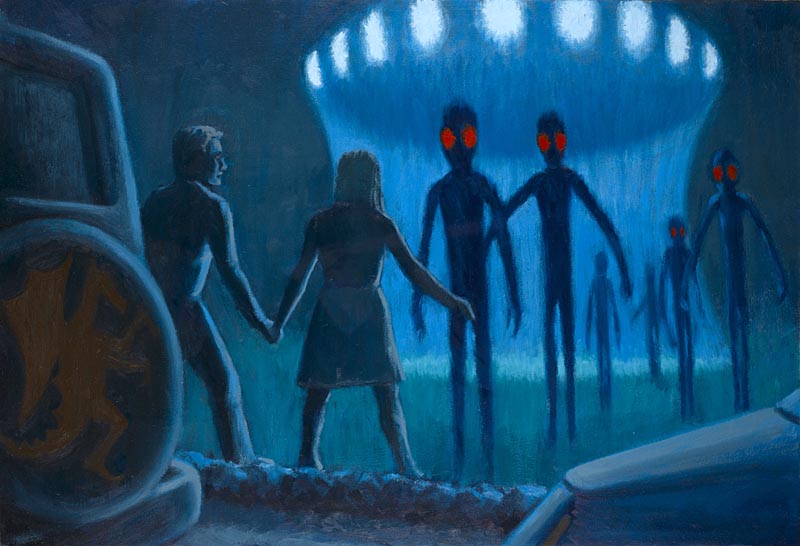 Our co-founder Hilary Evans was a renowned expert in the field of paranormal, and, as a member of the British UFO Research Association and co-founder of the Association for Scientific Study of Anomalous Phenomena, took a balanced and scholarly approach to the concept of alien abductions, preferring to focus on the psychological aspects of those who claimed to have experienced them, and finding a common thread between this phenomenon of the space age and more ancient beliefs rooted in myth and folklore. It comes as no surprise then that the subject has always been a lynchpin of the library, nor that Michael Buhler’s paintings of extra-terrestrials and UFOs have found a place here among our collections.

Michael (1940-2009) studied under his father Robert Buhler at the Royal College of Art, before becoming an art teacher himself, first at the Colchester School of Art, later at the City and Guilds School in Kennington. Influenced both by his father’s more traditional, delicate style and by the simple colours, shapes and abstraction of Pop Art, he painted many subjects, but his interest and belief in the existence of UFOs was particularly suited to his technique. A number of paintings seek to recreate the testimonies of those around the world who had claimed to have been abducted, while others depict UFO sightings. Whether you’re a believer or a sceptic, or somewhere in between, Michael Buhler’s work is a fascinating and colourful vision of worlds beyond our own.