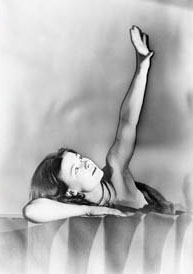 Yevonde Cumbers Middleton, who styled herself Madame Yevonde, was one of the leading portrait photographers of the 20th century. Born in 1893 to a well-to-do family, she began her apprenticeship with the photographer, Lallie Charles, and soon set up her own studio in London’s Victoria Street in 1914, at the prodigious age of 21.

Young, innovative, ambitious and thoroughly modern, Madame Yevonde recognised that the demure romanticism of Edwardian photographic portraiture had had its day and soon began to experiment with light, props and backdrops to present her sitters in an individual, original and often unconventional way. She quickly built up her reputation and with it, a prestigious client base, often offering complimentary sittings to famous actresses and dancers as a way to establish her studio. As her work began to appear in the smart, glossy society magazines such as The Tatler and The Sketch, her reputation as one of London’s leading portrait photographers increased, and was confirmed after being selected to photograph the wedding of Lord Louis Mountbatten and Edwina Ashley in 1922. The advent of the Vivex colour process in the 1930s, appealed greatly to Madame Yevonde’s creative and dynamic personality and she immediately adopted the process as her own, lecturing evangelically on its creative possibilities.

Mary Evans Picture Library owns almost 4,500 negatives from the Yevonde archive along with copyright to all her black & white work. Together with a selection of colour images and a substantial collection of rare images published in our archive of ILN magazines during the inter-war years (of which many originals have been lost or destroyed), the Mary Evans Yevonde archive brings together portraits of some of the twentieth century’s most exceptional personalities. The great and good passed through her studio and the faces captured by her camera are by turns feted, well-loved, well-bred, notorious, beautiful, heroic, talented and iconic. Highlights include a mesmerising 1932 reflective portrait of Diana Mitford, a young Judi Dench, the Duke of Kent as an inquisitive toddler, a sullen-looking eleven year-old Lady Diana Spencer and the redoubtable Lady Broughton captured in colour with her pet monkey Mr Winks!

Click here to see a selection from this prestigious collection.