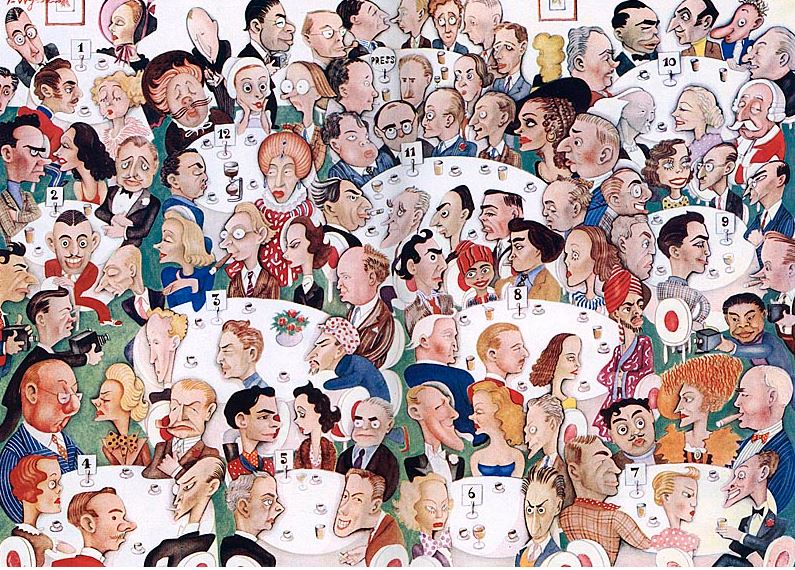 Caricature, the art of exaggerating or simplifying an individual’s physical appearance or characteristics for satirical, political or celebratory effect, has a long and laughter-filled history. In fact, if you type ‘caricature’ into our website, there are more than 4,500 portraits where jug ears, bulging eyes, lantern jaws, frizzy hair, knobbly knees, shiny pates, bushy beards, buck teeth, myopia, dishevelment, portliness or a lugubrious countenance are all artfully amplified in the spirit of satire.

Caricature dates back centuries, but began to gain a real foothold in popular consciousness with the booming satirical print craze of the eighteenth century and then truly hit its stride with the rapid growth of the illustrated press in the Victorian era, most notably in Punch, a full run of which we have held at the library since its earliest days. The Reform Club has some very fine examples of Georgian and Regency prints in which cartoonists introduce the principles of caricature in order to mock the beetle browed Charles James Fox or pinch-nosed Pitt the Younger, and of course the increasingly dissipated and scandalous lifestyle of the Prince of Wales. Punch was a hotbed of illustrative talent and humour, employing great artists such as Bernard Partridge, Edward Tennyson Reed and Linley Sambourne, who lampooned literally everyone of his era from Darwin to Disraeli.

Punch may be a household name, but there were plenty of other comical and satirical magazines where caricature was a natural bedfellow, such as Judy, Truth, Tomahawk and The Entr’Acte. The latter publication comes to us via the eclectic collection of Terry Parker, and includes hundreds of fantastic caricatures by Alfred Bryan of the famous and infamous; William Booth, John Ruskin, Lillie Langtry, Sarah Bernhardt and Gilbert & Sullivan among them.

To be drawn by ‘Spy’ aka Leslie Ward, ‘Ape’ (Carlo Pellegrini) or any other artist for (the English) Vanity Fair during the late Victorian and Edwardian era was a strong indicator of one’s social standing. Certainly milder and more flattering than many of the caricatures we feature here, we have almost all of the thousands of Vanity Fair portraits here at the library thanks to the collecting zeal of our founders, Mary and Hilary.

In a slightly different spirit, but bringing us right up to the 21st century, are the joyful caricatures of John Ireland, celebrating stars of sport, comedy, TV and music.

The ILN archive seems to get a mention every time we do a Collections Crossover but with nine different weekly publications spanning a century it’s little wonder, and with most magazines such as TheTatler, The Sketch and The Bystander peddling a sophisticated blend of celebrity gossip and quality illustration, it’s unsuprising that caricature features prominently. Sporting and racing figures were immortalised by ‘The Tout’ in The Tatler every week, while Fred May drew prominent members of various regiments and battalions during the First World War, and ‘Mel’ captured members of golf clubs around the British Isles. Another Tatler regular was Einar Nerman whose portraits of personalities in the world of theatre, dance and cabaret are rendered in a dramatic palette of red, black and white.

Theatre people were also the speciality of Thomas Downey and Alfred Bryan (again!) in the pages of The Illustrated Sporting & Dramatic News during the Edwardian era, while theatre AND film stars were the favourite colourful subject of Tony Wysard. By the 1920s and ’30s, caricaturists were adopting dynamic and increasingly abstract styles, such as Garretto who was frequently published in The Graphic and created portraits using shape and shading of important people such as Dame Laura Knight, or the opera singer Autori who happened to have a sideline in caricatures with a frenzied, futuristic feel. Add to this list Sem, Mel, Tom Titt, R. S. Sherriffs, H. H. Harris, Glan Williams, Hynes and Kate Carew (one of the few women caricaturists) and between them, they will have caricatured a who’s who of the early twentieth century. We’ve brought together a caricatured cast of prominent people in the ILN archive here.

Whether you’re searching for people, places or something entirely different, we hope our newsletter is a reminder that we like to show the past from many different angles and viewpoints. To request a search, a quote or to find out more about using our library, do get in touch by emailing pictures@maryevans.com or calling 020 8318 0034. We look forward to being of service.