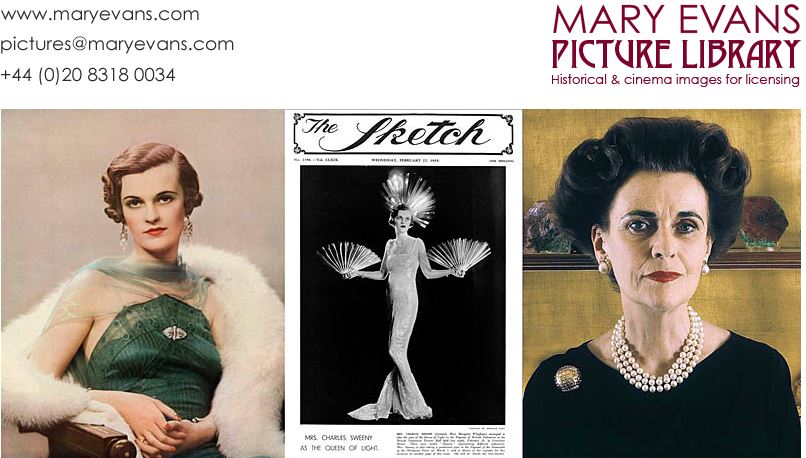 The upcoming BBC drama ‘A Very British Scandal’ has renewed interest in the life of Margaret, Duchess of Argyll, formerly Mrs. Charles Sweeny and before that, the celebrated Miss Margaret Whigham. During the 1930s, both public and press displayed an adoration verging on obsession where ‘The Whigham’ was concerned, which made her fall from grace following the sensational divorce trial of 1963 all the more spectacular. As custodians of the ILN archive here at the library, we have an unrivalled collection of images of Margaret in her glamorous youth, pictured in a succession of chic outfits, slinky evening dresses or exquisite fancy dress costumes attending theatrical first nights, society weddings, Ascot, golf tournaments, fundraising matinees and smart clubs always looking immaculately turned out and rarely cracking a smile. She appeared on the covers of The Sketch, The Tatler and The Bystander, all of whom praised her brittle beauty and stoked her popularity. Those magazine editors could not have imagined the savage character assassination she endured in a courtroom three decades later, or that the deb of the year would be dragged down by the press of the time to the role of disgraced duchess.

We have more than a hundred images of Margaret on our website, many discovered in our society magazines and mostly from the 1930s, her undoubted heyday. There are also some excellent portraits by Madame Yevonde including one where she appears with her poodles, Gabi and Suki, not to mention a set of photographs by Tim Mercer from 1986, which suggest a poignant bitterness behind her dignified, still-glamorous facade.

Margaret’s story is just one of many we find in an archive brimming with high society figures. It’s notable that Cecil Beaton’s early ambitions were always to have his photographs published in The Tatler and this title (for which we have a complete run from 1901 to 1965), along with The Sketch, The Bystander, The Graphic and The Sphere, are an incredible resource for finding pictures of the great and the good, the not-so-good and the ne’er do wells. You can take your pick of Mitfords, Lygons, Tennants, Churchills and Cavendishes, while peeking at their parties and homes, or accompanying them on their holidays and to fashionable haunts. Whether you’re searching for royalty and aristocrats, wealthy industrialists, theatrical dynasties, Bright Young Things, dilettantes, debutantes, earls or Gaiety Girls, if you’re working on a documentary, book or any other project where an archival Who’s Who of quality gossip would come in handy, do get in touch and we’ll see what we can find. Here are a few edited examples of the kind of thing we’ve uncovered so far.

As always, we’re on hand to help. Do get in touch either by emailing pictures@maryevans.com or calling 020 8318 0034. Have a good week and try not to do anything too scandalous.