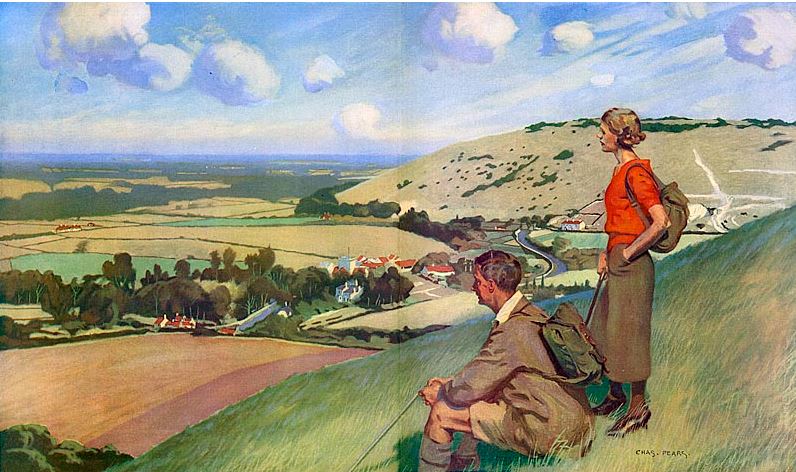 With the half-term break and long bank holiday just around the corner, it may be that many of you are planning a great escape in between the Platinum Jubilee celebrations. We’ve covered the British seaside in previous newsletters, but this week we’re looking at holidays that explore this green and pleasant land (as well as other countries) either by foot, bike, boat or four wheels. Because pulling on a pair of walking boots to tramp around the Peak District, or going on a motor tour of the Scottish highlands, is actually nothing new.

As more workers enjoyed paid holidays in the early twentieth century, the appetite for wholesome outdoor breaks in picturesque locations increased. Hiking, walking and rambling gained almost cultish status by the 1920s, with magazines and countless guide books dedicated to the pursuit. We have some delightful images from this period: colour illustrations and cartoons from the ILN archive including a photograph of the famous Kinder Scout mass trespass, humorous postcards by Donald McGill, and stunning photographs from Barnaby’s Picture Library and the Mustograph Agency showing some of the most breathtaking scenery in the British Isles as a backdrop to groups of hearty young women in shorts, tweed skirts and sturdy boots consulting maps or drinking in the views. Also of interest are covers and advertisements from ‘Hiker & Camper’ magazine, published monthly during the early 1930s and a postcard from the ever surprising Grenville Collins Postcard Collection of Millican Dalton, famous outdoors man, mountain guide and camping guru – the Bear Grylls of his day if you like.

Love it or hate it, camping is the ideal budget holiday solution. See the Scout Association archive for tips on how the experts do it, or browse images by John Gay for English Heritage for 1950s families sleeping under the stars. Gaze with wonder too at the evolution of the caravan, especially early examples by brands such as Eccles with their rustic country cottage styling or egg pod appearance. Special mention must also been given to converted train carriages, which offered a more luxurious form of camping. London and Midland Railways advertised theirs with the strapline: ‘All the fun of camping but with none of the bother’ (a promise many of us can definitely buy into). We’ve also included youth hostels in this selection of nostalgic holiday homes.

Before the hiking craze of the inter-war years came the cycling craze of the 1890s, the perfect mode of transport for dawdling along country roads laced with hawthorn and cow parsley, a topic that was a favourite of magazine artists across many of the publications we hold in the archive. Less than a decade later, the advent of the motor car meant that day trips could become more ambitious and long distance, causing roadside pubs and new-fangled roadhouses to spring up catering to the motorist-tourist. Both the John Maclellan and Michael Cole Automobilia collections are excellent for photographs of people and their cars, motorbikes and sidecars out on day trips, while the sophisticated magazines in the ILN archive recorded the rise of the trendy roadhouse with interest. Let’s not forget boating and canal holidays too – there are some lovely examples in Ros Fraser’s collection of photographs of her aunt and uncle who spent summers on their boat on the Norfolk Broads during the 1930s.

Finally, what’s a great outdoor getaway without a great British picnic? Some of our favourite images on this theme include an elegant Selfridges advertisement by silhouette artist H. L. Oakley promoting, ‘Hampers, Flasks, Luncheon Baskets, Camp Equipment and everything for the outdoor life’, stills of a rather raucous-looking 1933 picnic from the British Pathe Time to Remember collection and 1970s comic star, ‘Teddy Bear’ entertaining none other than the Wombles from the Playhour archive. Whether you’re searching for lavish Victorian spreads complete with servants, or a limp egg sandwich and a Thermos of tea in an unremarkable lay-by, click here to view a hand-picked panoply of picturesque picnic pictures.

Whatever you’re up to this bank holiday and wherever you’re going, we hope you have fun. If you’re working and particularly if you’re in need of pictures, please don’t hesitate to get in touch with us. Our email is pictures@maryevans.com and our phone number is 020 8318 0034. Happy bank holiday and happy Platinum Jubilee.

Image details: Two walkers take in the view at a picturesque spot near the coast of Brighton – Poynings, Sussex. Source Illustration by Charles Pears in The Tatler, 5 July 1933