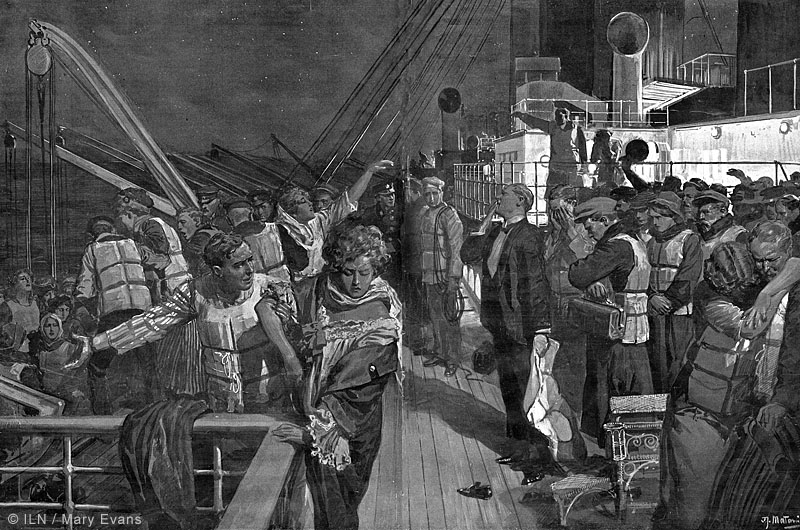 It’s almost a decade since the centenary of the sinking of the RMS Titanic, and as we look ahead next year to the 110th anniversary of that fateful night on 15th April 1912, interest remains high in this, one of the twentieth century’s most tragic and unforgettable maritime disasters.

We’re one of the best resources around for all things Titanic. First and foremost, as part of our representation of National Museums, Northern Ireland, we are pleased to offer images from the archives of Harland and Wolff, the shipyard where Titanic and her sister vessels were built. The collection includes pin-sharp photographs of the Titanic at various stages of construction, and numerous views of its lavish, ornate interiors.

The illustrated press of the day covered the disaster and the subsequent inquiry in forensic detail, with many accompanying photographs of victims and survivors, diagrams and illustrations. We have excellent material from the Illustrated London News and The Sphere, as well as contemporary newspaper covers via John Frost Newspapers, and we have just recently scanned more pages reporting on the Titanic from The Graphic.

Artefacts and mementoes relating to the ship are also available through our representation of Onslow’s Auctioneers, visual records of a major sale of Titanic memorabilia they held back in 1999. Many of the objects – a watch fob, steward’s badge, a doll, life belt, menus and letters – lend a personal, and particularly poignant aspect to the history of the ship and those were part of her story.

Finally, this is a tragedy that has been told and re-told on-screen and through our film collections, you can find posters and movie stills from various productions based on the disaster including, of course, ‘A Night to Remember’ (1958) and ‘Titanic’ (1997).

Picture credit: Based on the detailed eyewitness account of a saloon steward who survived the disaster, special artist of “The Sphere” Fortunino Matania produced this reconstruction of the heartbreaking scene as men saw their wives and children onto the Titanic lifeboats, not knowing whether they would ever see each other again. Date: 15 April 1912 ©ILN /Mary Evans