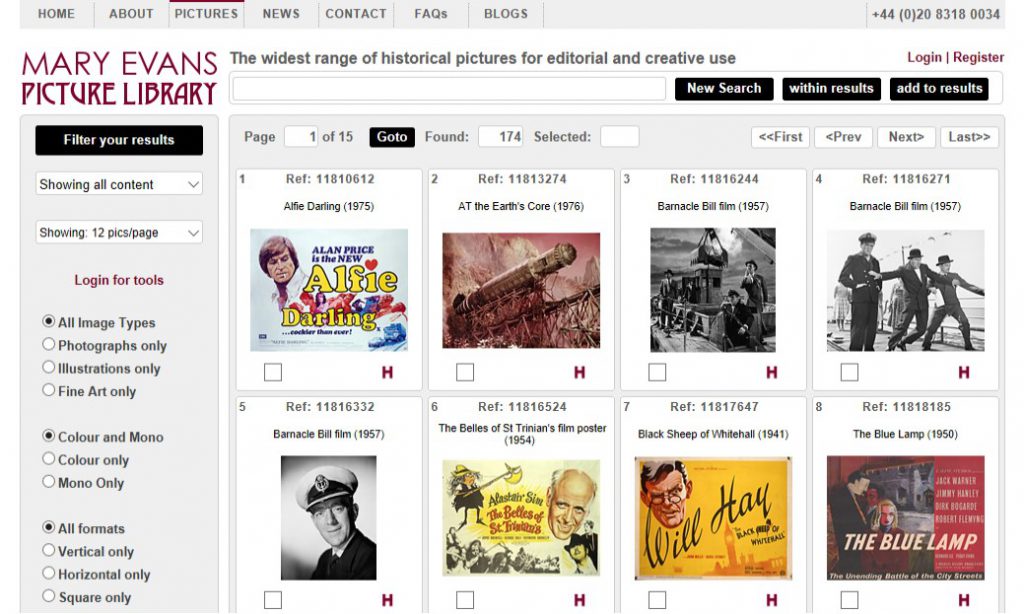 Consolidating its position as the leading UK specialist source for film imagery, Mary Evans Picture Library is delighted to announce its worldwide representation of the archive of STUDIOCANAL Films Ltd.

The STUDIOCANAL Films collection includes artwork, production and publicity images from over 1000 titles from the early days of sound cinema to the late 1980s. Highlights from the collection include early Hitchcock films, the classic Ealing comedies of the 1950s such as the Lavender Hill Mob and The Ladykillers, as well as the first half of the much-loved series of Carry On films including Carry on Screaming and Carry on Cleo. All genres are covered: war movies, including The Dam Busters, and family classics such as 1970’s TheRailway Children, not forgetting a fabulous range of horror and thriller titles, notably many from Hammer House. Other gems include Brighton Rock featuring the late Sir Richard Attenborough, the original The Belles of St. Trinian’s, Dunkirk with Sir John Mills and David Bowie in the arthouse sci-fiction tale, The Man Who Fell to Earth. A wide variety of stills from productions are joined by a range of superb film posters showcasing, in many examples, the very best of graphic and illustrative 20th century design. The Mary Evans content team is fully keywording the whole collection for the first time ever offering the opportunity to unearth never before published gems.

STUDIOCANAL, a 100% affiliate of CANAL+ Group held by Vivendi, is Europe’s leader in production, right acquisition, distribution and international sales of feature films and TV series. STUDIOCANAL operates directly in all three major European markets, France, the United Kingdom and Germany, as well as in Australia and New Zealand.

STUDIOCANAL owns one of the most important film libraries in the world, boasting more than 9,000 titles from 60 countries, including 6,000 feature films among which are the iconic Terminator 2, Breathless, Mulholland Drive and Belle de jour.

Mary Evans Picture Library’s long-established reputation for history has now been bolstered by the arrival of a million images charting the history of cinema through the combined collections of the Ronald Grant Film Archive, the Everett Collection and now, its exclusive partnership with STUDIOCANAL. While images from STUDIOCANAL are available initially for editorial use, clients interested in content for non-editorial projects are encouraged to get in touch as, subject to permissions, there is potential for images to be reproduced in a variety of additional forms including merchandise.

“The arrival of Studiocanal Films at Mary Evans Picture Library now firmly positions us as the leading UK specialist supplier of film imagery and enables us to fill certain gaps recently left in the market,” says Paul Brown, Managing Director. “The licensing of film content is notoriously tricky, but our direct partnership with STUDIOCANAL Films means our clients will have peace of mind and freedom to use images without additional clearances. Our ongoing aim is to provide the widest range of history and film material possible while continuing to provide the sterling customer service and specialism we are proud of here at the library.”

“We are delighted to partner with Mary Evans Picture Library to showcase the deep riches of STUDIOCANAL Films’s stills collection”, says Massimo Moretti, UK Library Commercial Development Manager. “We are proud of the catalogue’s position and profile in cinema history and working with Mary Evans Picture Library will offer us the chance to reach to new markets’ segments to showcase the relevance and importance of content catalogue licensing within STUDIOCANAL’s activities.”

Over 130,000 images from the Studio Canal archive are now available at www.maryevans.com, viewable to registered clients who log in. Click here to see a selection of movie memories from this exciting new collection or contact pictures@maryevans.com for requests and access.