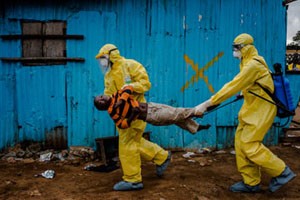 The award-winning Australian photojournalist has been recognised for his ground-breaking body of work covering the Ebola epidemic for The New York Times, which was captured over a period of 14 weeks. Daniel spent time in rural and urban areas of West Africa and his imagery documents the difficult, heart-breaking work carried out by aid workers and the local communities. He also captured compelling images of Ebola survivors and their families. His portfolio is testament to the humanity of Ebola’s victims, and to the resilience of the health workers and civilians who struggled to care for them.

Getty Images’ Vice President, Photo Assignments, Editorial Partnerships and Development, Aidan Sullivan says: “All of us at Getty Images Reportage congratulate our esteemed colleague Daniel Berehulak and The New York Times for Daniel’s stunning body of work documenting the Ebola Epidemic . This harrowing and award-winning project is a testament to Daniel’s ground-breaking skill, dedication and talent.”

Daniel’s Ebola project has also been recently recognized with a Pulitzer Prize. Click here to view and learn more about Daniel’s award-winning project.