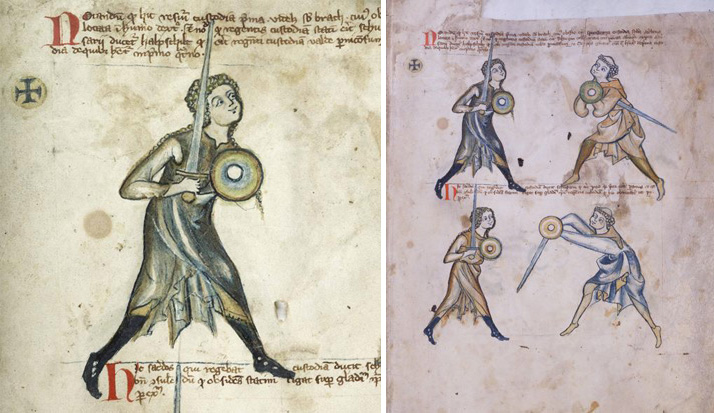 March sees the celebration of both World Book Day (4th) and International Women’s Day (8th). These two events give us the perfect opportunity to showcase one of the jewels in the Royal Armouries collection – ‘The Tower Fechtbuch’. Also known as I.33, it is the oldest known fencing manuscript in existence. One of the most intriguing aspects of I.33 are the illustrations a female combatant – ‘the first lady of traditional fencing’ – Walpurgis.

It is unknown where the I.33 manuscript originates from or why it was created, however it was featured in an exhibition as part of the 1936 Berlin Olympics and then disappears from the historical record until 1950, when it appears for sale at Sotheby’s in London. It was purchased by the Royal Armouries and became part of the collection at the Tower of London, where it was largely ignored for the next 40 years.

Walpurgis, features in the manuscript four times and is shown to be fencing against men (priests and scholars). This is unusual because when this manuscript was created in the 14th century martial arts, swordsmanship and combat in general would have been male-only pursuits, which makes Walpurgis’s appearance particularly fascinating and the subject of much debate.