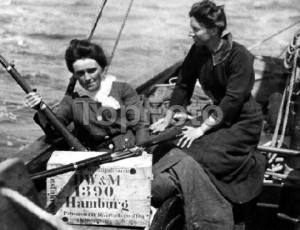 Over 600,000 people tuned in to watch the first episode of RTE’s ‘Rebellion’, a major 6-part series directed by Finland’s Aku Louhimies, on the struggle for Irish independence in 1916 as seen through the eyes of a group of friends, from different perspectives and with women taking the lead in the story. The series has been taken up by Robert Redford’s Sundance company for screening in the USA.

The series is timed for this year’s major centenary: on Easter Monday in April 1916 Irish republicans set about ending British rule in Ireland. Although in the midst of some of the fiercest battles in the European war, Britain heavily defended her position. As a result, a week of fighting left close to 450 people dead – and Ireland remained under British rule. In the arrests that followed, 90 revolutionaries were sentenced to death – 15 were shot by firing squad.

For the authorities, the rising was viewed as a stab in the back while Britain was at war. Erskine Childers and his American wife Mary had smuggled the guns in from Germany, sailing over to Howth on his yacht, the Asgard, in 1914. The guns were given to the rebels in preparation for the rising.

This was a seminal moment for the Irish and for Britain, and in the years that followed the rising many of the survivors were instrumental in the formation of the Irish Free State in 1922. Topfoto has a tremendous stills collection covering the Dublin rising, from different perspectives and starting with the Asgard bringing in the guns.

View a selection of images here.

Molly Childers on Asgard, smuggling guns from Germany to Howth, July 1914, ready for the Easter rising of 1916 ©TopFoto