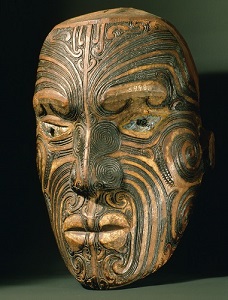 Werner Forman Archive has a treasury of New Zealand material, which is available online for downloading.

Journeying to New Zealand was a favourite affair for photographer Werner Forman. Despite nearly losing his life in a bizarre road accident he took many images of the gorgeous land and its cultural artefacts.

Aotearoa – the Land of the Long White Cloud – was settled by Polynesians in around 1250 CE. They soon developed their own unique culture, with a self-image of warriors. Sadly they quickly depleted the unique animals of their new home – like the extinct Giant Moa, many of whose bones were found by archaeologists after having obviously been slaughtered in large numbers.

Maoris placed great emphasis on their spiritual connection to their ancestors and Gods: Tane is the god of forests and of birds, important for their survival. The tribes were often fighting with each other, before the Pakeha, or Europeans landed on the islands, which they called New Zealand, starting in the 17th century. Although relations were initially peaceful, sadly various colonial wars broke out over land and the Maori suffered illness, discrimination, and dispossession. Although now there are initiatives to improve the conditions of the indigenous people, there is a long way to go.

Werner Forman contributed all the images to the book, The Maori, Heirs of Tane, by writer and yachtsman David Lewis in 1982. Lewis went so far as to learn the polynesian way of sailing so he could master Maori canoes, and conducted several exhilarating voyages in the Pacific to help us understand how Polynesian people sailed immense distances, without using compasses or other navigation instruments, although they did have maps made out of beadwork. Of course these wouldn’t have helped them on their journeys into the unknown which reached New Zealand.

Worship of ancestors was very important, as in many Polynesian cultures. Below is a ceremonial adze or tokipoutangata which a chief would use to make the first chips on a boat or house. The handle would be buried with him, while the blade would be passed on and fitted with a new handle.

Here is some jade jewellery, worn by a woman – these became heirlooms. Te-Wai-Pounamu means “the waters of greenstone”. All Pounamu are sourced from riverbeds and boulders in the South Island, and are sacred gifts, never to be sold.

Barbara Heller, Director Werner Forman Archive says, “We have quite breathtaking content of the cultural wealth and landscapes of this beautiful country.”

“Specialised, knowledgeable and with many rare images, the Werner Forman Archive is an invaluable contributor to the making of high quality, illustrated, information books and represents all that is best in British Picture Libraries,” says Christine Vincent, Toucan Books, UK “Throughout Toucan Books long association with WFA, we have sourced images of quality and beauty, and will continue to do so with access to the excellent website.”