Camera Press and the family of Yousuf Karsh are honoured that Karsh’s famous wartime portrait of Winston Churchill features on the new look £5 note. The Churchill note as it is being called, will be the first British note to be printed on polymer and will enter circulation in September this year.

However, Churchill’s belligerent expression in reality owed as much to the fact that his  cigar  was snatched away prior to the shot being taken! As Karsh recalled in his memoirs: Churchill’s cigar was ever present. I held out an ashtray, but he would not dispose of it. I went back to my camera and made sure that everything was all right technically. I waited; he continued to chomp vigorously at his cigar. I waited. Then I stepped toward him and, without premeditation, but ever so respectfully, I said, “Forgive me, sir,” and plucked the cigar out of his mouth. By the time I got back to my camera, he looked so belligerent he could have devoured me. It was at that instant that I took the photograph.

Camera Press is proud to have represented the Karsh archive for nearly 70 years, Karsh was one of the first photographers to join the fledging  agency set up in 1947 by Tom Blau. 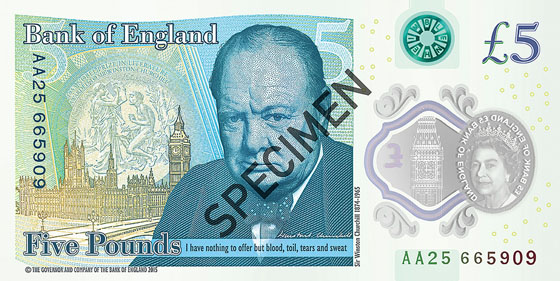