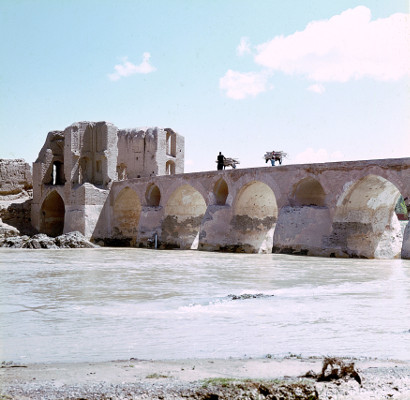 The Silk Road was an extensive trading network between East and West, starting in ancient times, under the Han Chinese dynasty (207 BCE–220 CE). Silk and other valuable commodities came overland and via sea routes, to reach Europe via the middle east.

As well as goods, culture, religion and technology, and, unfortunately, diseases, spread along the route as traders, caravans and local people interacted with each other.  The first consumers of these goods were ancient Greece and Rome, but after the latter collapsed, the Eastern empire of Byzantium became a major destination on the trade route.  Byzantine Emperor Justinian (ruling from 527–565 CE) sent monks as spies on the Silk Road from Constantinople to China and back to steal silkworm eggs, resulting in silk production in the Mediterranean, particularly in Thrace in northern Greece, and giving the Byzantine Empire a monopoly on silk production in medieval Europe.  Trade went both ways, and Byzantine coins have been found in Chinese Emperor’s
tombs.

The Silk Road flourished, despite massive political upheavals such as the rise of Islam and the rise and fall of the Mongol empire in the East, and Marco Polo (see previous article) was one of the first widely-read travellers to document it. In the end, political disruption brought the Silk Road to a close in the early 1700s.

The Chinese Government, always aware of its history, have embarked on one of the largest civil projects in history: The Belt and Road Initiative (BRI), formerly called One Belt One Road (OBOR) which aims to unite the Far East and Europe via land and sea routes, much as its predecessor did, opening up massive opportunities for trade,
prosperity, and cultural interchange in the future.

“I was sure you would have the perfect thing in your fabulous archive.”
– Nancy Hall, NHI Books –