Last Chance to see: Changing the Story: Photographs of British Life in Black and White (1917-1962) 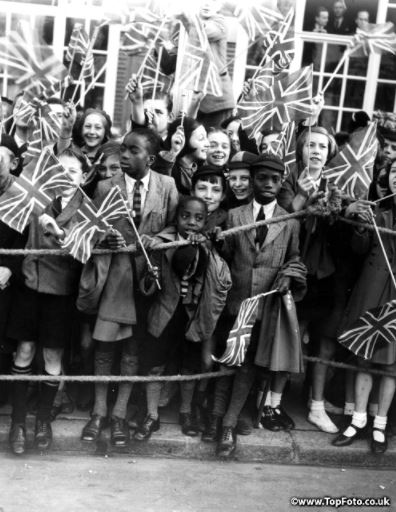 ‘I open the album and am spellbound; immediately struck that what unites these temporally disparate photographs – these stories of people and places across time and space – is the racial diversity of the protagonists in them. These photos flip the script on Britishness: my history lessons did not look like this.’
– Rommi Smith, 2021

Oxford, UK: Changing the Story centres an overlooked British history, through a series of striking photographs dating from 1917 to 1962, interpreted by award-winning writer and performer Rommi Smith during her time as the inaugural writer-in-residence at leading photographic agency TopFoto. Thirty-four of these revelatory photographs will go on public display for the first time alongside new writing by Smith which responds directly to the photographs. Changing the Story runs at the North Wall from 10 until 29 January 2022 and admission is free.

Commissioned to delve into the archive at TopFoto, Smith was struck by how many of the fleeting moments captured by photographers such as Ken Russell and Roger Bamber disrupt monoculturalist ideas of Britishness as white. The photographs include Caribbean Naval officers and sailors heading off to war in 1917; excited flag-waving school children in 1938; myth-busting shots of mixed-heritage families onboard the Empire Windrush in 1948; groups of Jamaican men accommodated in underground bunkers known as the ‘Clapham Deep’; carefree children playing on the streets of 1950s Notting Hill; and the only known face-on photograph of jazz singer Judy Johnson in Soho’s A&A Club in the early 1950s

Describing the finds as ‘electrifying’, Smith has created a series of eight written responses – new poetry, monologues and lyrics inspired by the voices and stories in the photographs – which feature in the exhibition. They are accompanied by audio recordings accessible via QR codes, with music by Christella Litras (Windrush Movement of the People), performed by actor Lladel Bryant (DCI Banks, Intergalactic, People Like Us).

Visitors will be invited to contribute their own creative responses within the exhibition.

Rommi Smith is an award-winning poet, playwright, theatre-maker, performer, and librettist. Winner of numerous prestigious residencies and commissions for institutions ranging from the British Council to the BBC, she is a three-time BBC writer-in-residence. She was the inaugural British Parliamentary writer-in-residence and inaugural poet-in-residence for Keats House, Hampstead. Her writing is published by Bloodaxe, New York University Press, and Oberon Modern Press among others. Further information about awards and work at www.rommi-smith.co.uk.

Founded in 1927, TopFoto archive is one of the largest and most significant historical photographic archives in Europe. It combines a modern digital licensing business with the richness of 4,000 square feet of prints, glass, and acetate negatives from 1910 onwards, and represents or owns the collections of a number of influential photographers including John Topham, Roger Bamber, Ken Russell, Colin Jones. In 2020/21 TopFoto’s archive was awarded a grant of £85,500 from DCMS via the National Lottery Fund for Heritage in recognition of its national significance. The archive appointed Rommi Smith as its inaugural writer-in-residence in January 2021. This exhibition arises from that work.

About The North Wall

The award-winning North Wall Arts Centre at St Edward’s School, Oxford runs a public programme which attracts over 20,000 visitors a year to more than 100 performances and exhibitions. Alongside its programming, The North Wall produces new plays, programmes work by early-career arts professionals and hosts free, residential arts placements for emerging young artists from all over the country. As well as being home for pupil drama, art and dance activities, it has extended its vision and reach well beyond the School to develop an innovative arts venue for Oxford and a well-established national touring venue for the best contemporary theatre and performance in the UK. St Edward’s School, Oxford, is the principal sponsor of The North Wall’s innovative public programme of theatre, exhibitions, music, dance and talks.