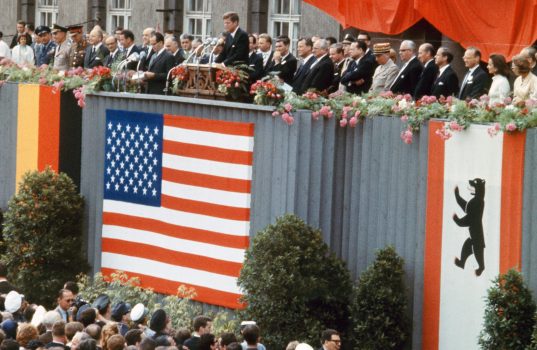 Getty Images will distribute over a century’s worth of definitive moments from dpa Picture-Alliance’s coverage of German politics, sports, entertainment and more

dpa Picture-Alliance has today announced a strategic partnership with Getty Images, a world leader in visual communications. The distribution deal will see over a century’s worth of definitive moments from German history and culture reach a large international customer base through Getty Images’ extensive distribution network.

Over a million wholly-owned photographs from dpa Picture-Alliance – the picture agency of Germany’s largest news agency dpa – will be available in select markets via Getty Images’ website and industry-leading sales team.

The agreement will see both up-to-the minute and archive collections from the dpa Picture-Alliance portfolio now available. This will include complete coverage of major sporting events, a comprehensive file of German politics from 1949, and some of the most recognizable images from German business and lifestyle, history, culture and entertainment.

Andreas Genz, Managing Director of dpa Picture-Alliance, said: “dpa Picture-Alliance portfolios includes the most diverse and unique archive of Germany. dpa’s photographers have been documenting the biggest moments in German history at home and abroad for the past 70 years since 1949. The partnership with Getty Images will expand the reach of our extensive picture library. I have no doubt that Getty Images’ international platform and licensing expertise will help our content to reach new audiences around the world.”

Lee Martin, Getty Images Senior Vice President, Global Strategic Development, said: “Getty Images is pleased to partner with dpa Picture-Alliance and include their extensive content as part of our market-leading editorial offering.  At Getty Images we deliver an unmatched breadth of visual coverage spanning news, sport, entertainment and beyond produced both by our own award-winning photographers and videographers and those of our trusted image partners. We look forward to a long and successful collaboration with dpa Picture-Alliance.”

The dpa Picture-Alliance collection will launch on the Getty Images website later this month.

The wholly-owned photographs from dpa Picture-Alliance will be available in Japan and USA.