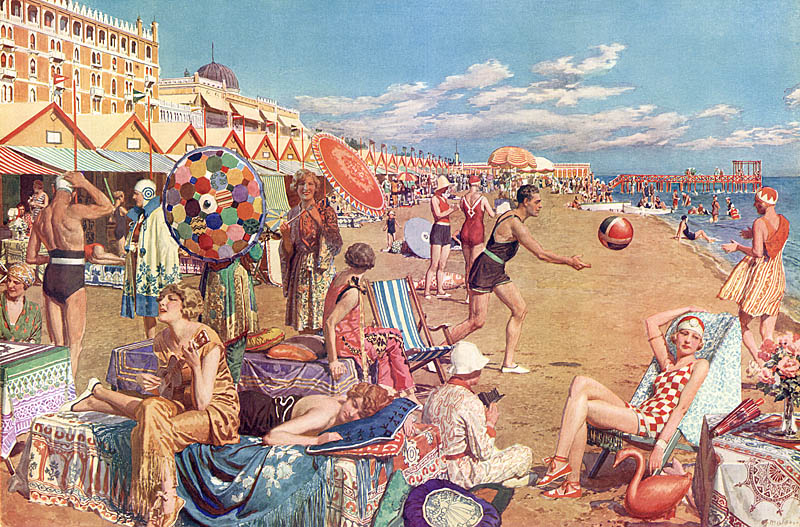 In 1904, Clement Shorter, editor of The Sphere magazine, engaged a twenty-three year-old from Naples as the magazine’s ‘special artist’ forming a fruitful, working relationship between publisher and artist that would last over forty years.

Fortunino Matania (1881-1963) had been born into the world of illustrated journalism. His father Eduardo was a leading artist for the quality Italian weekly, L’Illustrazione, and his cousin Ugo, would also go on to work for The Sphere.

Young Fortunino was trained in his father’s studio and quickly showed a remarkable precocity. He exhibited a painting at the Naples Academy at the age of eleven and, aged fourteen was employed by L’Illustrazione as an artist in his own right.

As special artist for The Sphere, Matania’s role was to provide illustrations of news events around the world, which he did at rapid speed, churning out images of impeccable quality covering a wide range of subjects from the Delhi Durbar of 1911 to shopping scenes in London’s West End.

Matania’s watchwords were authenticity and accuracy, and his detailed, photo-realistic pictures were frequently based on eyewitness accounts, offering us an insight into the past that photographs of the period somehow fail to satisfy.

Matania was present to record four British royal coronations and perhaps most famously, produced a rich and detailed visual record of the Great War, visiting the Front on several occasions in order to see conditions first-hand.

After the war, while still engaged by The Sphere, Matania turned to his real artistic passion – historical reconstruction, covering all periods from ancient Rome to Victorian times. He went to great lengths to research his subjects, and frequently made authentic props and furniture himself for his models to use.

Most of our Matania images are taken from The Sphere, which forms part of The Illustrated London News archive housed and managed at Mary Evans.

In addition, Mary Evans have some excellent examples of his war art via David Cohen Fine Art as well as an eclectic mix of oil paintings, sketches and family photographs via representation of the estate.

Matania’s output was prolific and his subject range diverse. From Egyptian tombs to the Titanic, nobody can recreate the past quite like Fortunino Matania.

Further reading: Luci, Head of Sales & Research at Mary Evans, gives lectures and has written several books on Matania including, ‘Drawing from History: The Forgotten Art of Fortunino Matania’ published by The Book Palace.