Mary Evans collection of the week: The Donald McGill Archive 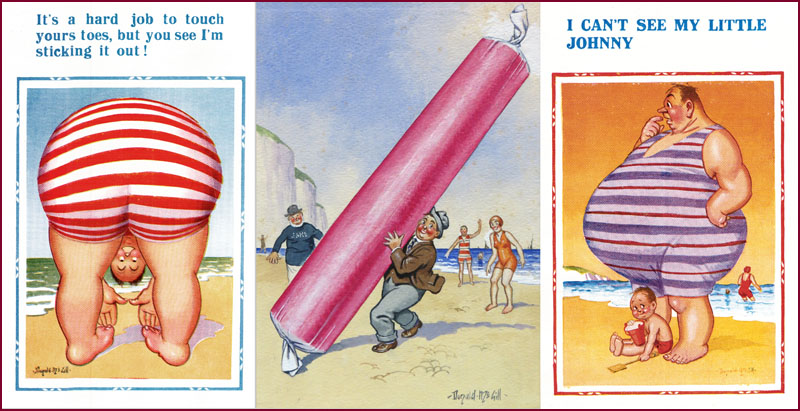 If any artist sums up the great British holiday, then it must surely be Donald McGill (1875-1962), king of the saucy seaside postcard. We are thrilled to now represent his archive, especially as McGill lived in Blackheath and has a blue plaque at 5 Bennett Park, a short walk from our office. McGill gave up a steady job at an engineering firm to take up postcard art at the comparatively late age of thirty-two and in a career spanning more than five decades produced some 12,000 separate postcard designs, which collectively sold in their millions, although it was his publishers rather than McGill who were to amass a fortune from his unique talent. A modest man, McGill came from a respectable Victorian family and so his transformation into Britain’s master of comic suggestion seems all the more surprising. In 1954, he was even prosecuted under the Obscene Publications Act and fined £50, plus £25 costs.

While there are plenty of seaside-themed images to choose from, featuring his familiar jolly cast of portly bathers, buxom matrons and amorous, courting couples, McGill’s back catalogue is far from limited to coastal comedy and risqué double-entendre. His illustrations also paint a portrait of the twentieth century, from his unmistakably cheery and cheeky point of view. There is a rich seam of postcards from both world wars, and others that comment on family life, relationships, leisure, work and class. Our representation of the Donald McGill archive collection also extends to designs by other artists who were published by Inter-Art (for whom McGill worked from 1914 to 1931).

To put you in a holiday frame of mind, click here for a selection guaranteed to raise a smile and trigger a giggle.