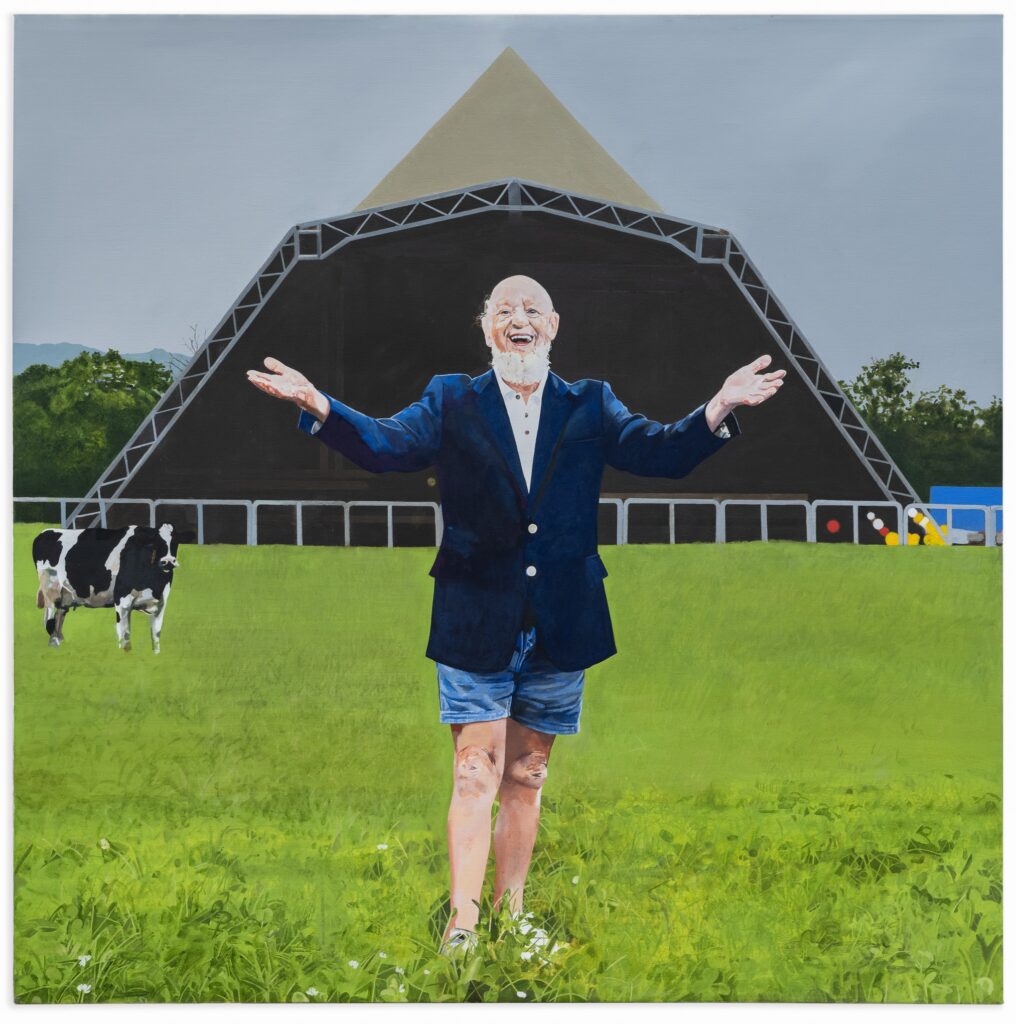 The National Portrait Gallery, London, announced its commission of a new portrait, depicting Glastonbury Festival’s founder, Michael Eavis on Saturday 25 June 2022. Painted by British artist, Sir Peter Blake, the portrait shows Eavis standing in front of the festival’s iconic Pyramid Stage at Worthy Farm, where the 50th festival is being hosted for the first time in three years, following cancellations due to the Covid-19 pandemic. Unveiled at the festival on 25 June 2022 – Peter Blake’s 90th birthday – the portrait will go on public display when the National Portrait Gallery reopens in 2023, following the completion of its major transformation project, Inspiring People.

Michael Eavis was born in 1935 and grew up on Worthy Farm in Pilton, Somerset. After attending both Wells Cathedral School and the Thames Nautical Training College, he joined the British Merchant Navy, but returned to Worthy Farm, aged 19, on the death of his father. 16 years after inheriting the 150-acre dairy farm and its 60 cows, Eavis hosted the first Glastonbury Festival at the site in 1970, inspired after watching Led Zeppelin perform at the Shepton Mallet Blues Festival. 1,500 fans attended the first festival, which now attracts 200,000 people per year, making it one of the largest greenfield music and performing arts festivals in the world. In 2007, Eavis was made a Commander of the Order of the British Empire in recognition of the positive impact he has made through his work.

A fellow music lover, Sir Peter Blake is one of the greatest living British artists. Born in 1932 in Dartford, Kent, early works that brought him fame include the cover for The Beatles’ iconic album, Sgt. Pepper’s Lonely Hearts Club Band, which he designed with his first wife Jann Haworth. Blake is a painter, sculptor, draughtsman and printmaker, who combines elements of popular culture within his work. Blake first exhibited his work in 1950 and from the 1970s to today, he has enjoyed regular gallery and institutional exhibitions – including retrospectives at the Tate Gallery, London in 1984 and most recently at Tate Liverpool in 2007. He continues to be associated with the world of music. In 2022, Blake was knighted as a Commander of the Order of the British Empire for his services to art. The Gallery holds two other portraits created by Blake in its Collection – the 1991 screenprint, T for The Beatles, a reprise of his The 1962 Beatles painting and a double portrait of husband and wife, art dealer Leslie Waddington and antique jewellery expert Clodagh Waddington (1999).

Dr Nicholas Cullinan, Director of the National Portrait Gallery, London said: “Celebrating both the sitter and artist’s major contributions to British art and culture, we are delighted to have commissioned this new portrait of Michael Eavis by Sir Peter Blake for the National Portrait Gallery’s Collection. Smiling with his arms open wide, this painting celebrates Michael and his legacy as he prepares to welcome music fans from across the world back to Glastonbury this year, where we are delighted to unveil it to also celebrate Sir Peter Blake’s 90th birthday. As a fantastic addition to our contemporary collection, we very much look forward to exhibiting this wonderful portrait when our transformed National Portrait Gallery reopens in 2023.”

Michael Eavis CBE, said: “I’m so pleased to have been painted by my old friend Peter, and that my portrait is his first commission for the National Portrait Gallery. That’s a rare treat for a Somerset dairy farmer!”

Peter Blake CBE, said: “I visited the first Glastonbury in 1970 and have loved the festival ever since, so I was thrilled when the National Portrait Gallery commissioned me to paint Michael’s portrait. After receiving the commission, we took Michael for lunch at a fancy West End restaurant. He arrived resplendent in his trademark denim shorts, which stopped the restaurant in its tracks! I knew then, that I had to include them in the portrait. I hope my painting encapsulates Michael’s free spirit, joyful energy and love of life.”

Sir Peter Blake is currently exhibiting a series of over 170 watercolours, collages and drawings illustrating Dylan Thomas’s landmark 1953 ‘play for voices’, Under Milk Wood, at Waddington Custot, London, until 23 July 2022

The National Portrait Gallery was founded in 1856 to encourage, through portraiture, the appreciation and understanding of the people who have made and are making British history and culture. Today it promotes engagement with portraiture in all media to a wide-ranging public by conserving, growing and sharing the world’s largest collection of portraits. The Gallery in St Martin’s Place, London is currently closed until 2023, while essential building works take place on the Inspiring People redevelopment project, which will transform the Gallery, including a complete refurbishment of the building and a new learning centre. During the closure period, the Gallery will continue to share its Collection through its digital channels and a series of nationwide partnerships and collaborations. www.npg.org.uk

Peter Blake’s first solo exhibition was held in 1962 at Portal Gallery, London; solo shows followed at Robert Fraser Gallery, London (1965) and at Leslie Waddington Prints, London (1969). His first retrospective exhibition was held in 1969 at the City Art Gallery, Bristol. Subsequent retrospectives were held in 1973 at the Stedelijk Museum, Amsterdam, touring to Hamburg and Brussels and the Tate Gallery in 1983. In 1994 he was made the Third Associate Artist of the National Gallery, London. In 2007, the Tate Liverpool held a major retrospective of Peter Blake’s work which toured to the Museo de Bellas Artes, Bilbao, Spain in 2008. A large retrospective of Blake’s collage work, including some of his earliest pieces, took place at Waddington Custot in 2021 with the title Peter Blake: Time Traveller. The major monograph Peter Blake Collage was published by Thames & Hudson alongside the exhibition. In 2022 Waddington Custot presented Blake’s Under Milk Wood series, the first time it had been exhibited outside of Wales to commemorate the artist’s 90th birthday. Marco Livingstone’s Peter Blake: One Man Show, was republished with an additional chapter by Thames & Hudson to commemorate the same occasion. Peter Blake lives and works in London. He is represented worldwide by Waddington CustotArtistic and digital pioneer Harriet Bridgeman founded the company in May 1972, and since then Bridgeman Images has unlocked the treasures of the greatest collections in the world. By making artworks available for reproduction, Bridgeman Images has given a lifeline to museums, institutions and private collections, with the funds generated from posters, postcards and prints dedicated to conservation, restoration, exhibitions and acquisitions.